Sad News at the Pumpkin Patch

Today Adam called me at school and asked me to stop by after work because he noticed some pumpkins were missing. I came over and he was right, there were several areas of the pumpkin patch where nice orange pumpkins used to be clustered and they were gone. We were pretty bummed. There is a Middle School on the other side of his property (the opposite side from my school) and the kids often cut through his field. Looks like they found the pumpkin patch. Then tonight we were at dinner and one of his brothers called to say he was leaving his house and noticed kids walking up the street. His brother drove up the street and when he opened the car door, he noticed 5 kids in the patch and they quickly dispersed. He called Adam right away and we left to come home. We got there and noticed that many more pumpkins were gone, including the nice big round orange one that we know was there this afternoon. We drove around and found a couple pumpkins smashed on the street over. We called the police to file a police report....however, I don't know how seriously they took this. We aren't talking about just a few pumpkins here people! I feel hurt and sad. After they left, we drove around a bit more and up the street we noticed 2 more pumpkins smashed, including the big one. The weirdest thing....the biggest one had been carved, and then smashed. Now....who does that??? Who steals a pumpkin (and HOW did they carry that thing??), carves a jack-o-lantern face into it, and then smashes it in the middle of the street?????? Also, we only noticed about 5 pumpkins smashed in the area....so where are the other 15 or so that we noticed are missing??? We don't know an exact number, because we hadn't counted them, but we knew for sure where there were clusters. They even ruined the little one that I carved Chase's name into, so when it grew it would scar over and say CHASE really big. I planned to surprise him with that one. =*( 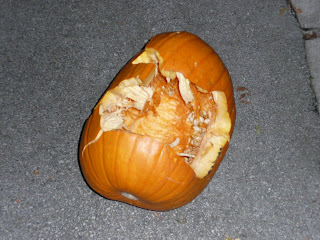 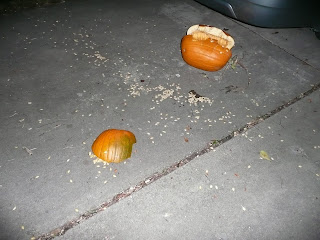 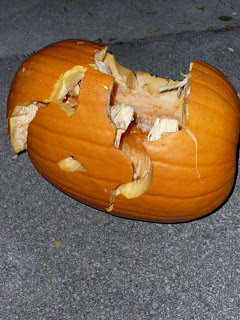 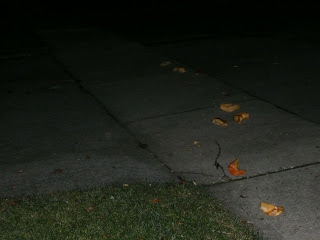 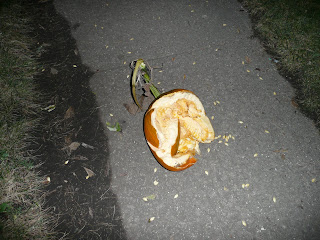 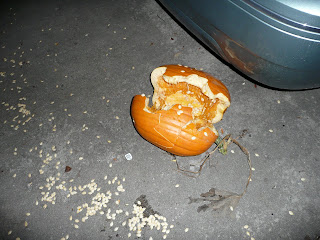 but the chase pumpkin makes me the saddest.