Here is a post that contains a bunch of random pictures of things that have going on lately! 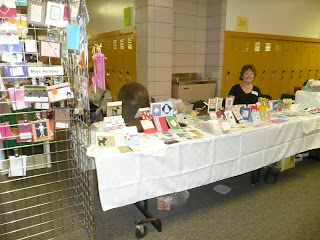 Mom at the SHS craft show selling her cards. I was able to sit with her for a little while before my meeting. She sure is talented! 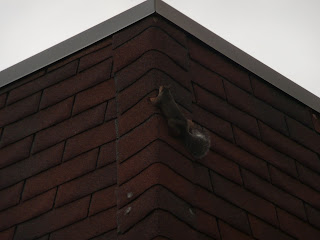 I was leaving work one day when I heard a weird sound and I looked behind me and this crazy squirrel was running around like crazy on the vertical roof. I think if it stopped moving, it would have fallen off! 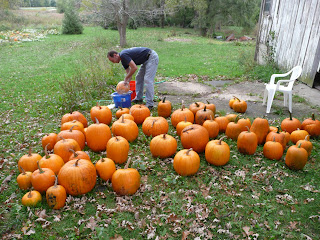 The pumpkin business is going well. We have been able to start selling pumpkins from "Hopkins' Pumpkin Patch" to family and friends! More pumpkins were picked today. Sad news is that an animal has gotten into many of the pumpkins. Our HUGE one in the barn now has a big hole in it and they got into several in the patch last night. It is very weird though....many of them just have a small hole in them and all the seeds are taken out. What type of animal would do that???? 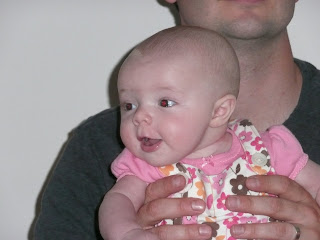 Little Layla at our college friend's housewarming party last weekend with her daddy. Isn't she precious??? I was a bit of a Layla hog and held her most of the time. I got to feed her and she fell asleep in my arms! 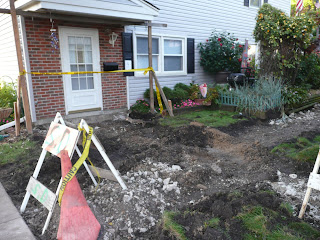 I came home from work on Tuesday, opened the front door (from the inside) to check the mail and found this crater outside my front door! I was just a bit surprised! But the new sidewalk looks great and my front stoop is no longer all uneven and cracked! 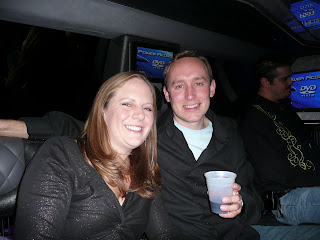 Friday night we went down to the city for Adam's brother and his fiancee's bachelor/bachelorette party. We took one of those SUV limos and had a lot of fun. I haven't been out until 4:00 am in I don't know how long!

That's it for updates!

that small hole with all the seeds taken out.....maybe a chipmunk???

You've learned so much from the garden this year...can't wait to see what next year brings!!!

Your mom has a ton of cards! My MIL sells cards that she makes, too. She does small craft shows mainly. I used to sell Close To My Heart products...all scrapbooking and stamping stuff. Does your mom do stamping? Just curious. I love to see other people's stuff. I haven't done anything in forever. It's starting to pile up!