I posted last time about some holes in the pumpkins on the floor of the barn and outside. We have covered all the pumpkins outside the barn with plastic and that seems to be keeping them away. We then put all the pumpkins on the hay wagon because up until that point, those had stayed safe. However, apparently the animals are more determined than we are. Adam's brother saw him on his street yesterday and said he thought kids had gotten into the barn and poked holes in them! Upon further investigation, Adam found a bunch of pumpkins on the hay wagon ruined, but it was clearly these sneaky animals. Beautiful perfect pumpkins! They just make these tiny holes and take out all the seeds! It is a little painful to see. 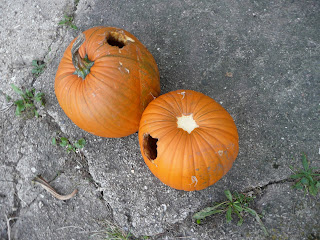 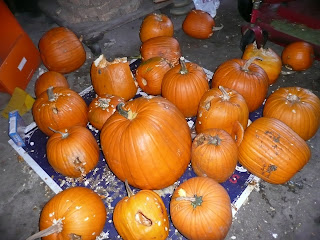 All the ruined ones taken off the hay wagon 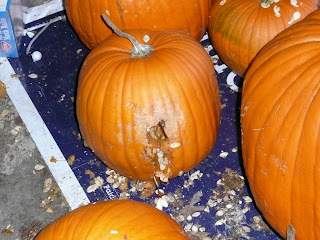 Why do they have to keep doing it OVER AND OVER?

The hay wagon is high off the ground, so it must be an animal that can climb!

Ah! That is a bummer! I think I have seen that before where an animal just makes a hole and sucks stuff out...I think it happened to us before but I can't remember what animal we decided it was. :(

Come on, Steph! Make lemonade! Those little stinkers are just helping you make lots and lots of jack-o-lanterns! Getting the seeds out is the worst part. They're HELPING you! :)