Nobody puts Baby in a corner!

In October, Adam gave me tickets for us to go see Dirty Dancing the musical. I have been SO excited to go see it and last night was finally the night. Of course, Murphy came along with his oh-such-perfect-timing laws and on Thursday I came down with strep. Lucky me, I have had strep enough to KNOW when I have it, so I went to a Take Care Clinic (at Walgreens) after school. Although the rapid strep test came back negative (like it always does for me), she trusted how my throat looked and how I felt and gave me a prescription. The catch was that I was supposed to wait two days, see if I still felt the same and THEN fill it (that would be Saturday!?!?!) . But see.....I KNEW that I had strep, so after hashing it out with mom and her agreeing with me that it was OK to go ahead and I wasn't taking antibiotics unnecessarily (because I am really against that), I got the Rx filled right away. So glad I did! I did take off work on Friday, because I was not a very effective preschool teacher with the way I felt on Thursday. I slept for 10 and a half hours on Thursday night! So glad I did, because I was rested up and READY to go "have the time of my life" (even if I was still taking Advil and throat lozenges every couple hours).

Adam had a long day at work because he had to work outside for 8 hours in the below freezing weather, so when he got home from work, he took a nap. We didn't have time to go to dinner beforehand, so we got in the car and headed to the theater, relying on Chloe (24 reference), my ever-reliable GPS who has never gotten us lost. We were going along just fine, until Chloe told us to take Lower Wacker. Sounds like a fine idea except....LOWER Wacker is underground. As we were toolin' along, waiting for the next direction, suddenly Chloe said, "lost satellite signal" and she refused to tell us where to go! After we finally got out and waited for her to find her signal again, it was a little tense for a while as we drove around in circles. We FINALLY found the parking garage, booked it to the theater, and made it inside JUST in time.

I REALLY enjoyed the show! It was very true to the movie and a lot of it was word-for-word from the movie. There were scenes that weren't in the movie, but they just added to the plot. It was pretty cheesy at times, but so is the movie! Adam even said he enjoyed it quite a bit! We both agreed that the part that was a bit disappointing was there wasn't very much singing done by the leads. It is a musical, so there was singing, but the chorus did pretty much all of it. For example, at the end, when "Time of my Life" is playing and Johnny and Baby are dancing, there were two people in the back (up on some stairs) singing the song, while Johnny and Baby danced. Their voices were amazing, but the singing was not a focal point of the show. Overall, we really liked it and if you like the movie, then you should go see the show! 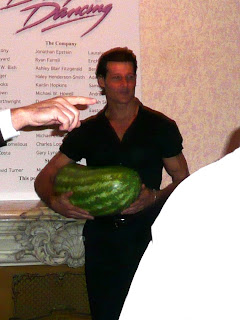 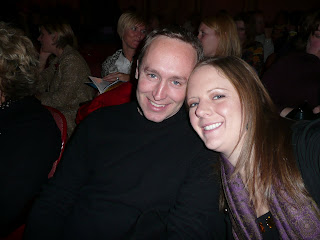 The usher-nazi came and yelled at me for taking this picture during intermission,
but I just had to have one! 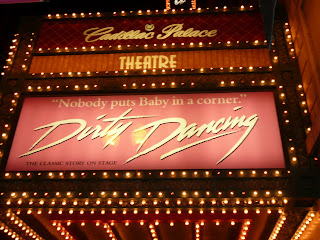 Has anyone else gone to see it? Are you planning on going? Tell me what you think!

I agree that the lack of singing was a bit disappointing! But the guy who sang "Time of My Life" had an AMAZING voice!

I bought a shopping bag that says, "I carried a watermelon." It was absolutely worth the $10 I paid for it!

I love going to shows but it seems like we never go. My husband has never even seen Dirty Dancing the movie...maybe I could convince him to go for Christmas. ?? Glad you had fun!! It sounds like it was the time of your life!

I once saw a couple on Oprah who choreographed the final dance for their wedding...and Oprah had them on, and then...she brough out Patrick Swayze (sp?) and he danced with the lady. There's something about the way he takes control of a person when he's dancing...sigh!

I can't even imagine "Dirty Dancing" without Patrick Swazye
dancing in it. It was so sad to hear he has cancer..
Glad to hear you enjoyed your time out despite strep throat...