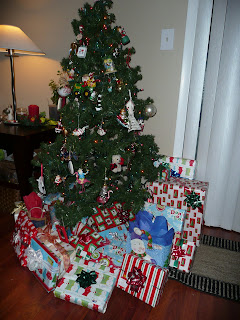 First, I wanted to show you a picture of my Christmas tree with all of the presents underneath for other people because I LOVE Christmas and I LOVE giving people gifts!
And the MOST exciting news..... 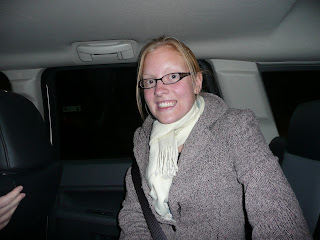 Erin came home for a visit!
(Erin in the car after we picked her up)
She was scheduled to come in on Tuesday at 4:20. Mommom and Poppop were scheduled to come in at 7:30 from CA. On the way to the airport to pick up Erin, I checked Mommom and Poppop's flight status and it said canceled. Uncle Richie talked to them and they said it wasn't canceled because they were sitting on the plane in Palm Springs! However, a few minutes later the bad news was broken to them. At least they are scheduled to come in today now...cross your fingers for better weather!
Anyway....we finally got to the airport and Erin's flight arrived about an hour late...which was fine with us because they were letting very few flights land because of the bad weather! Mom and I stood there though the doors and down the hallway that Erin was supposed to come through and Dad was off to the side staring. Every tall blonde that came though, mom would say, "IT'S HER!" and then I got excited and then soon realized that mom needs glasses. But finally mom and I looked over and saw Erin hugging dad! She had somehow come out without us seeing! There were lots of tears and lots of hugs and we are so happy to have her home until January 5th. Erin decided that she wanted Chipotle for dinner and we stopped there on the way home from the airport. She has also been craving Starbucks and had that on the way home as well!
Posted by Stephanie H at 9:50 AM

So happy to hear Erin is home safely and didn't miss out on any time with all of you because of the bad weather. Sounds like you had a great Christmas too!

Talk to you soon :-)
Kristin