My Love/Hate Relationship With Heat

2 weeks ago, I woke up in the middle of the night to a really bad smell. I couldn't figure out what it was, but after running around the house making sure nothing was on fire, I realized that it smelled like it does when you turn your furnace on for the first time in the winter. That made me feel a little better. But then I realized that my furnace wasn't working. It had somehow tripped the breaker and when I flipped it back...it still wasn't working. Since it wasn't an emergency, I went back to bed....cold. Adam's dad came over in the morning and thought it was the control board, so he had an HVAC friend come over after school to look at it. It was the control board and it needed to be replaced. He did hot wire it so that it bypassed the control board and I could have heat until I replaced it.

Well...then I had a decision to make.... Do I replace the control board on an old furnace? And risk something else breaking? Or do I just get a new furnace? (Side note, I have had many problems with it the last 3 winters!) 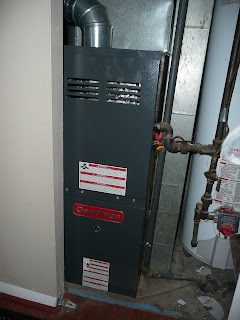 I decided on a new furnace! When I moved in, my home inspector told me that the thing was on its last leg and so I am sure when I try to sell my place, the next home inspector will REALLY emphasize that to the buyers. I figured that I would rather buy a new one now and get use out of it than wait until I need to sell and lose bids because of a geriatric furnace! SO.....now you can oooh and ahhh over my beautiful new furnace! 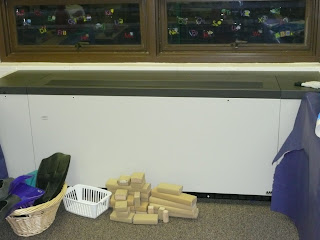 This picture is another example of heat-related stress for me. This is the univent in my classroom at school. We had really bad heating/cooling in our building and they FINALLY replaced the system over last summer. And now...it is is worse! Throughout the winter, my univent has been very temperamental. Sometimes it likes to blow air that is 102 degrees. Then it decides it is too warm and opens up the vents from the outside and blows in air that is 37 degrees. But then it decides that is too cold and begins blowing 102 degree air again. All in the same hour! The maintenance people have been out a million times and it had actually seemed to be getting a little better. Still blowing cold air a couple times a day...but at least not the crazy extremes 3 times every hour!
I was satisfied with that. Well...then came the news this week that because Illinois is crazy and corrupt and has not released its budget money...we (the school district) are broke. So they are making HUGE cuts, firing top level administrators, cutting teaching positions, riffing all assistants, cutting school budgets by 10-20%, freezing pay increases, cutting ALL fieldtrips and lowering the temperature to 68 degrees in every classroom. Now, 68 doesn't sound SO bad. 68 in your house wouldn't be so cold. But whatever it was supposed to be at before was cold. So you can imagine what 68 feels like! Luckily, we have a really cute school mascot and school spirit wear and at least I look cute in my Ducklings sweatshirt.....EVERY DAY!
So those are my heat problems. I hope you are staying warm this winter at school and home!
P.S. Don't worry too much about the budget cuts. The district has asked Pepsi to come remove the light bulbs from the vending machines in every school, so we will be saving lots of electricity that way. That will surely pull us out of the hole!
Posted by Stephanie H at 3:33 PM

I really do hate those univents. HATE!