Dumbo and an Eggroll

Last week was the annual Country Fair at my church. For a church, it is a rather large scale carnival with rides, games, yummy food, drinks, and entertainment. I have been running the Ice Cream and Smoothie booth for many years. I recently tried to figure out how many. I think it has been more than 8. But I don't know for sure. A couple years ago I asked Amy to be on the Committee with me because she is an enormous help and I can rely on her to make smoothie mix and run the booth and she totally deserves a t-shirt for what she does. (Only committee chairs get a Country Fair t-shirt.)
Country Fair time means spending lots of money, eating dinner at the fair every night, getting little sleep and having lots of fun! It is also a huge fundraiser for the church. Which is why I don't mind the spending lots of money on food part. It starts on Monday night with set-up. Well...I take that back. It starts in June as soon as the fair is over. The "Big 6" we call them (the ones who run the whole fair), of which mom is a member, start working on next year's fair as soon as this one is over. But the craziness for me starts on the Monday before the fair starts. Monday and Tuesday are set-up days where we set up our booth, clean the smoothie machines, buy ice cream and make smoothie mix. Of course ordering and scheduling come before that....but I like all those organizational pieces. Then the fair runs Wednesday through Sunday. 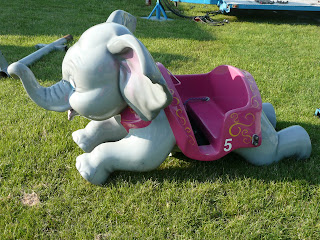 I just had to post this picture because it made me laugh. On Monday, Amy and I got to the fair and saw Dumbo hanging out on the lawn of the church. Clearly he belonged to a ride...but he wasn't attached and he looked so cute. So the Carnies (those who work for the ride company) looked at my strangely as I took a picture. 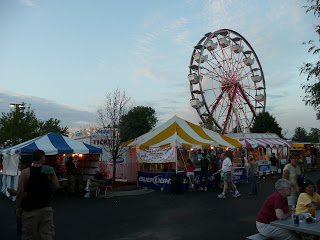 Here is a picture of the fair! 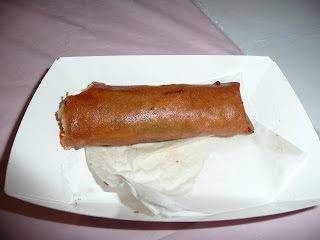 And here was my big excitement this year!
An egg roll!
Not just an ordinary egg roll.
A vegetarian egg roll!
That doesn't happen very often.
As I mentioned, there are many yummy food booths. There is a Mexican Food Booth (called "Holy Taco"), Pizza, Filipino Food Booth, American Food Booth, Corn, Fruit Water, and Ice Cream and Smoothies. I have never been able to try to eggrolls from the Filipino Food Booth because they contain ground beef. I have *never been able to have eggrolls or spring rolls from any restaurant because they always contain meat or beef base or something.
*By "never" I mean since I have chosen to be a vegetarian. Which was in 8th grade. So it was a very long time ago.
This year the chair of the Filipino Food Booth (ahead of time) made vegetarian eggrolls for me. I was so excited! And touched. I was able to have a Delicious egg roll! Yum. I had several throughout the fair.
And Sunday, when I was eating my eggroll, we are just going to pretend that I did NOT find pieces of ground beef in my mostly vegetarian eggroll and spit it out in my napkin and then proceed to pull it all apart and only eat the very healthy fried outside part and let Amy eat all of the insides.
Posted by Stephanie H at 3:18 PM