"Meet my friend Adam, he is a Democrat"


I was at BluRazz with some of my girlfriends after a barcrawl in Dundee in September of 2006. BluRazz had been "our" bar for about 9 months by that point. The door guys knew us, we got free shots, the bartenders gave us free drinks and we were there almost every weekend. It was OUR place. After the bar crawl, we went back to our regular hang out. I was feel a little crabby that night and didn't feel like dancing, so I was sitting on a bar stool next to the dance floor. That is when Angelo approached me with his famous line!

Adam was there with his guy friends for Angelo's bachelor party. Thank goodness Angelo was getting married and they were there that night! Adam and I talked all night and at the end of the night my friend Robin said, "You'd be stupid if you don't ask for her number and bring her to dinner". So...Adam did get my number! Now, I had absolutely no interest in meeting a guy in the bar. However, I kinda wanted this guy to call.

And then he finally called! He was working a bunch of over time and overnights and he finally got around to it. He was working with a guy and Adam mentioned me and said it had been so long, he didn't know if he should call, but the guy convinced him to!

We made a plan for our first date at Buffalo Wild Wings. I picked the place because there is so much going on there, I figured if the conversation stopped, there would be stuff to look at. Apparently he thought it was a little weird for a vegetarian to pick a wings place! Before our date, I was SOOOO nervous because I had never really been on a date with a stranger. I had boyfriends and had hung out in groups, but going on a date with a stranger was new for me. But it went well and we wanted to hang out again. Life got in the way, however, and our second date wasn't for three weeks! He was in his friend Angelo's wedding the next weekend and the following weekend I went to DeKalb for Homecoming. Finally the third weekend we went to dinner and Zainies (comedy club) for our second date. We went on another date during the next week and after that we started going out regularly.

Anyway, the moral of this post is that we met at BluRazz. Since then, we have hung out there many more times and Bridget and I have celebrated our birthday bashes there the last two years. It is still "our" place. The people who work there have changed, but we are comfortable there and we have many memories there. Adam and I had talked about going there on the night of our rehearsal dinner (or even our wedding day) to take pictures in front of the sign with Angelo and Robin since it is because of them we met.

This past Sunday, I saw on Facebook that BluRazz was closed. WHAT? Apparently there are new owners and it is closed for two weeks. No one knows what is going to happen. After many text messages back and forth, Bridget and I decided that we should meet there this week to take pictures in case the name changes. We talked to Robin and Angelo and they agreed to meet us there. Bridget and Tony also wanted pictures in front of it because although they met many years ago, that is where they reunited and started dating.

On Wednesday, with Chasey in tow, we met Bridget and Tony, Robin, and Angelo up at BluRazz for a photo shoot! 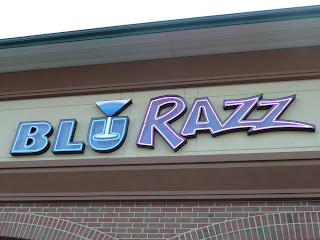 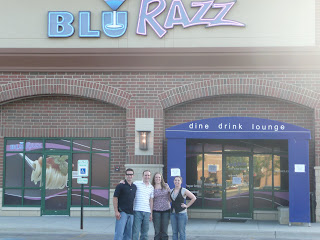 Angelo, Adam, me and Robin 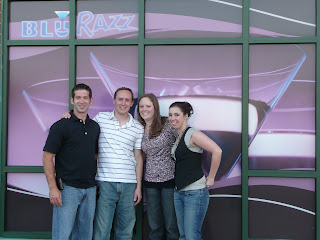 Thank goodness for Angelo and Robin! 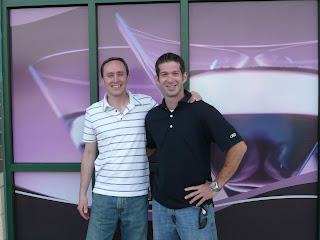 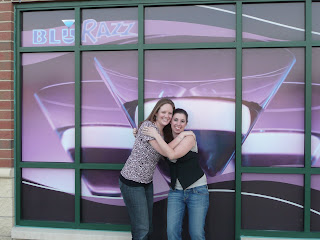 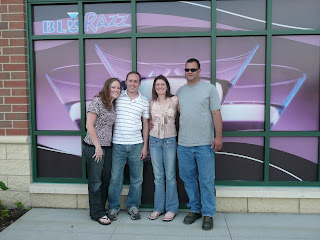 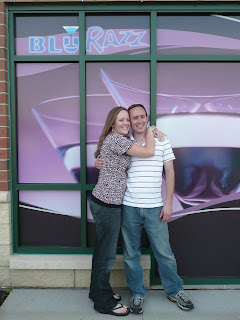 I love you honey! 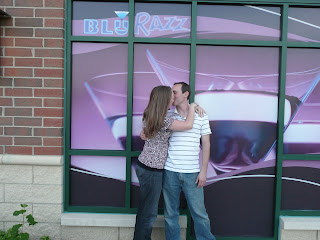 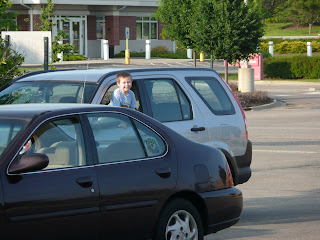 Oh yeah! Don't forget about the 4 year old in the car during all of this. He was right by us, but he wanted to stay in the car. Don't worry, the window was open and we had the keys! 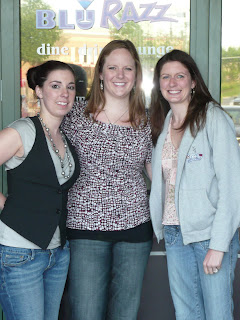 3 of the 4 original BluRazz girls (not pictured: Kristina)
Did you know we were on a BluRazz flyer? 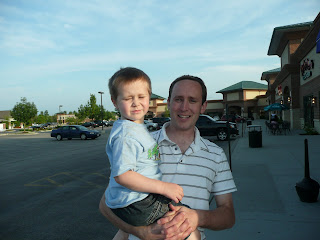 Hanging out and chatting after our photo shoot.
Chasey with his Uncle Adam 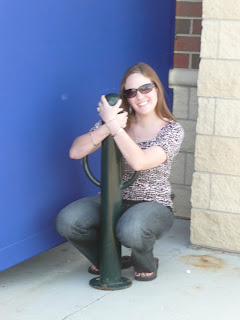 I REALLY want a memento from BluRazz. My parents met at Woodfield Theaters (the old theater that used to be a separate building from the mall) while they both worked there. Years ago when they tore it down, my uncle climbed over the fence and took a hunk of bricks as a memento for my parents. The bricks are sitting on their fireplace to this day. I tried to get Adam to bring a chisel to BluRazz and steal me some bricks, but that didn't fly. The only thing outside was this stanchion (I just learned that word 2 weeks ago) and since they wouldn't let me take it home, I posed for a picture with it. 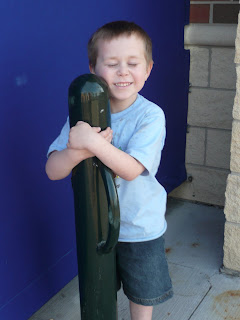 Chase also wanted to take a picture with the stanchion.
Umm...sorry Austin...it may have fell on his head before the picture. He wrapped his legs around it like I did and it fell over on him. He shook it off like the big boy he is and posed for a picture. It was very hard not to laugh!

How did you and your significant other meet?
Posted by Stephanie H at 8:11 PM

I can't believe BluRazz is closed! I love that place!