A while back (a couple months ago) there was a rather large fox on the playground at my school. It was a pretty big deal because it was big and we have a fenced in playground! I came to find out that she lives under Adam's brother Tony's neighbor's deck....with her babies! There have been many fox sighting in the area and Adam's aunt (who lives at the end of his street) even saw it in her front yard. Well on Tuesday I was driving to work and the crazy fox with a huge squirrel in its mouth ran RIGHT in front of my car! So...I turned down the side street it ran onto and started following it with my car so I could take pictures! The thing was running fast and I was trying to drive and take out my camera and change the settings on my camera...so they aren't the greatest pictures...but I thought it was pretty neat to see! 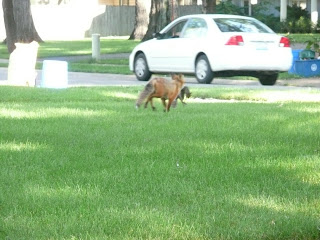 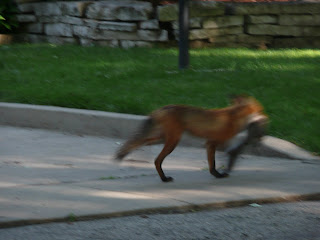 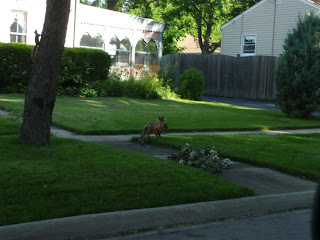 He is a very BOLD fox. Please be careful driving! ;-)