So I began telling the story of "Stephanie and the Too Tiny Utility Closet" a few days ago here.

We ended on Monday night with the water heater I bought too big for my tiny closet. Too big by 3/4 of an inch.

Tuesday night Adam and I went back to Home Depot to return the TBWH (Too Big Water Heater). I called GE to see if they made a smaller model and the guy on the phone told me, "You should talk to Home Depot, they can tell you better". ?!?! Home Depot can tell me better than the water heater YOU make??? Whatever! Well HD said that 16 1/4 was the smallest they sell.

Then we went to Sears where Dad found one online that is 1.5 inches taller (we can live with that, just requires some connector changes) and 15 3/4 inches wide. Just 1/4 of an inch wider than my current one. We can find a 1/4 inch in that closet! So we went in....talked to the guy. The brochure they had on site said it was 16 inches. Woah. The Internet said 15 3/4 and the Internet doesn't lie. After much back and forth (sales guy, Adam, me) we decide that PROBABLY the Internet is right because isn't it much easier to type 16 than 15 3/4 and the typist of 16 was probably the lazy one and 15 3/4 is accurate. I asked the guy to measure one, but they didn't have one on display. I asked him if they could open the box and he said that we couldn't until we bought it.

So we bought it. 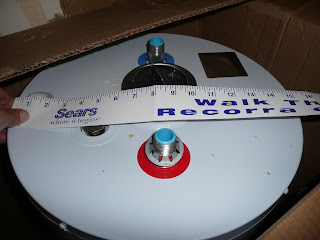 And we measured it. 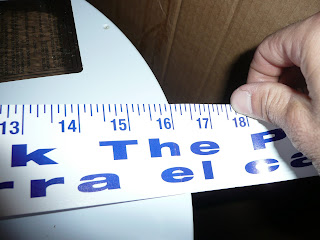 And it was 16 inches.
So we returned it.
Without ever leaving the store.
I think they thought I was crazy.
But we truly didn't believe we had an extra 1/2 inch. 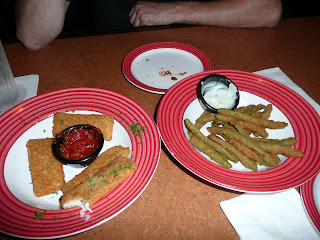 So Adam and I went to TGI Fridays for dinner because we were hungry from TBWH hunting.
I convinced him that we should order Green Bean Fries because they are yummy. He DID try one, but probably wouldn't order them again. I LOVED the cucumber Wasaibi Ranch Sauce even though I usually don't like hot things.
Then we went to Menards and they didn't have anything smaller than 16 1/4 inches either.
About that time we called Adam's brother Tony who has a lot of plumbing experience and he stopped over. He also used to be a home inspector so I like to ask him questions to find out if I do something if it will make a future home inspector (when I eventually sell my place) tell the buyers to run for the hills. So....he shoved the return air vent (that is on one side) and we got about 1/2 an inch. He said he thought we could probably fit the 16 inch diameter TBWH in there. It might require a 2x4 to keep it shoved to the side...but it is doable. And he wouldn't tell a client to run for the hills if he saw it so that made me happy. 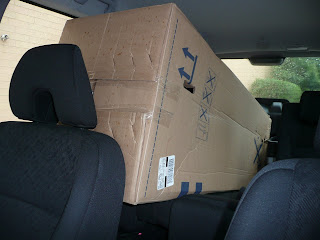 So then Wednesday afternoon I called up Sears and said,
"Hi, I was in yesterday and bought a hot water heater and then returned it because it was too big after we opened the box. If you still have it I am going to come in and buy it...again. I will take the one with the open box!"
So I did.
And they totally thought I was nutty.
And I went by myself so I was proud. 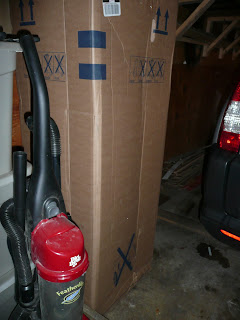 There it is...sitting in my garage.
My third TBWH of the week.
Or my second?
Well...my second AND my third I guess.
Adam and Dad are currently installing it tonight.
We shall see how the shoving of the TBWH goes!
Posted by Stephanie H at 5:54 PM

Ugh! Home improvement stuff can really be a nightmare sometimes! I'm proud you went to pick up the RSWH (right size water heater) by yourself.

I love those green bean fries at Friday's, so if you ever need someone to share them with, you can call me!