Car Buying and A Tour of the Gardens

Yesterday afternoon spent doing all kinds of fun and relaxing things! Well...not really. But it felt pretty good because this is my first REAL week off of summer break. The week before VBS was my first week with no summer school, but it was ALL VBS prep ALL the time, so I didn't really have any freedom. This week I do! I have 3 weeks before school starts. The problem is I typically go into my classroom for several days before school starts to set it up. But I REALLY don't want to this year. In fact, I think I might not. Maybe I will just stay late the first week and set it up. I can do that because the preschoolers don't start until a week after the rest of the district. I digress....

So yesterday I spent the first part of the afternoon vacuuming and washing my car at the self-serve car wash place in preparation for my lease inspection on Friday. My lease was up August 2, but I knew I wouldn't have time to do any car shopping in July, so I extended it until September 2. No problem, right?

Well, our lovely president and his apparent opinion that the US is made of money and keeps throwing it around has gotten in my way. Because of the Cash for Clunkers program (you bring in an old car with poor gas mileage that could be worth $100 and the government gives you $4,500 and then you buy a new car with "better" gas mileage) there are barely ANY cars available. I would really like to buy a Ford Escape, well it just so happens that the Escape qualifies for the C4C program, so everyone is taking their $4,500 and buying them. Leaving no choices for me. The girl who is trying to purchase a car like a normal person. No, I don't want a red car. No, I don't want tan interior. No, I don't want chrome rims. I just want the car I want. I am spending a lot of money and I would like to be happy with it. Not only does the C4C program leave me with few options, but the dealers have sold so many cars that they don't really want to deal. A month ago they would have been happy to deal with me to sell a car, now...they don't care. Grrr. I still don't know what type of car I will end up with. I am NOT happy.

After washing me car, I went over to weed the little garden. It was in BAD shape! But I put my gloves on and got to work. I did the ENTIRE thing yesterday non-stop. By the end my back wasn't feeling so hot, but it looks great! 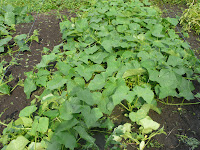 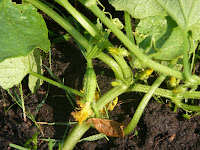 The awesome cucumbers and a little baby cucumber growing. I need to watch them carefully so I can start to pick them when they are the right size for pickling and not let them all get too big. 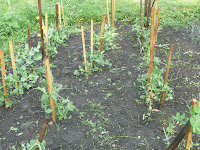 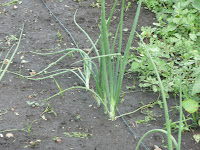 The sugar snap peas (I picked 3 more) and green onions (I am picking the larger ones for Grandpa today). A lot of the sugar snap pea plants were trampled and eaten. We think by a deer possibly because just the tops were eaten off. I would like a fence around the garden eventually, but it would have to be a pretty tall and solid fence to keep away the deer (and tall and solid=money). 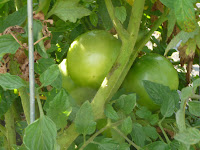 The tomato plants look great and there are a ton of healthy green tomatoes! 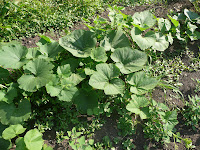 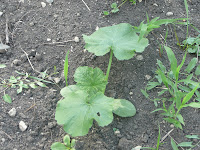 Th picture on the left is a gourd plant that is growing and very healthy. The picture on the right is a baby pumpkin plant. Some are big and healthy and some are tiny like this one because they were planted late because a couple rows didn't even come up. What the heck?? I don't know!

Although we are behind with the pumpkin growing at this point in the year compared to last year, it is probably a good thing. Last year a lot of the pumpkins were ready in August and hopefully this year they will be ready in September. We just have to pray for some hot weather to get those plants growing and producing healthy pumpkins!

That sucks about your car shopping! :( What a pain!

The garden looks great, though! You guys should consider doing CSA boxes.