So last time I wrote about my car search here, I was VERY frustrated. I have good news now!

However, before before that...
Sister-Erin updated her blog and her layout. Super cute! Make sure to leave her a comment and encourage her to update more often!

Back to the car search..

So as you know, I was looking for a 2009 Escape. I wanted silver (or black as a second choice) only and preferably a grey interior. Well. There aren't any. There were some red ones. Some silver with a tan interior. Some white. Some really expensive ones. But not what I wanted. I started to feel bad that I was being girly about the color. But ya know what? Buying a car is a big purchase and I wanted to be happy!

So after Adam called about 7 different dealers just to be told, "Cash for Clunkers wiped us out. There aren't any 09 Escapes" we finally found one that was willing to locate a car. A black ( I could deal!) 09 with all the options I wanted and only one I didn't want (black rims). They came down a lot in price and I was to go pick it up Monday (This was Thursday). It was in Wisconsin so they had to send someone to get it. They said we didn't have to sign anything yet, but we sat there while he talked to the guy in WI about the car they were going to trade and it was all good. Woo Hoo! I was so excited. I emailed our guy Sunday night to let him know I could come in any time Monday.

Well Monday morning I got an email from him saying, "Oh you didn't get my message Friday? The other dealer won't trade. Sorry"
?!?!?!?!?
So I spent Monday morning on the phone and on the Internet. Adam called our guy who said sorry, but the other dealer wouldn't trade. He SO didn't leave a message. He was WAY too wimpy to. We could have been looking all weekend and lost out on many cars that keep getting sold. Then Adam talked to the owner of the dealer. Adam explained that we were pretty upset about this and the OWNER of a CAR DEALER said, "There are more important things in life than buying a car."
?!?!?!?!?
Well, OF COURSE there are. But YOUR JOB is it sell cars. If a parent was upset about little Suzie not learning her colors I would never say, "There are more important things in life than learning your colors". I had a few choice names to call him.
So we stated again. We called and Internet-ed for several days. Then we had the idea to buy a used car. Well it wasn't so much an idea, but out of necessity because there are literally no 2009s left and the 2010s aren't out yet. So we started the used car search. We called around. About that time I had posted on Facebook about all the drama and a co-worker suggested Haggerty Ford in West Chicago. We visited there and really liked a silver 2008, but we still wanted to look around. The next day, we visited another dealer who supposedly had a silver 2008. Adam talked to them and they said it would be there after 1:00. Well, we went at 7:00 and it wasn't there. Apparently the sales manager is driving it and he was off Tuesdays.

Annoyed. Done with them.

So we went back to Haggerty and they were wonderful. The 2008 they had was fully loaded...heated leather seats, sun roof, cargo package, etc. We worked with a wonderful sales guy (let me know if you need to buy a car in the area!) and because of using my co-workers name, they gave us a GREAT deal. The car has 23,000 miles, which is about 11,000 a year (just about what I put on a car), so it has already depreciated, but doesn't have TOO many miles. I was feeling a little guilty about having so many options (I feel like I should only have a bare bones car), but we decided that it was worth it. It wasn't that much more a month, I will most likely want to drive it longer, it will have a better trade in value, and it will be very useful for many years (even when we have kids....several years down the line!).
So I am happy and love my *new to me* SILVER Escape. 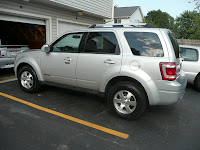 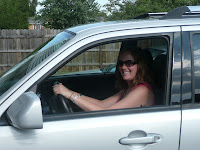 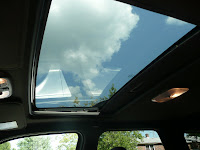 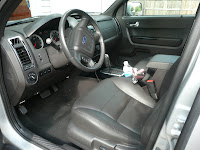 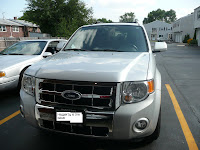 Of course there are more important things in life than buying a car...but the OWNER said that? Seriously? Ridiculous. Almost as ridiculous as the crappy t-shirt guy.

I'm sorry you had such a frustrating experience...but yay for your new car!

love to see the big smile as you sit behind the wheel of your new vehicle..it's a beauty!!