Whip It Up-Tomato and Spinach Toss

For my other Whip It Up cooking adventure this week I decided to make another recipe from my binder. This also came from the same mom of a student at my old job. She sometimes reads my blog, so if you are, "Thanks again for these yummy recipes! Adam thanks you too!"

Anyway, she got this recipe from here. I know this because it says it on the paper! In the recipe print out I have, the picture of the dish looks slightly different, but the recipe is the exact same. The new picture on Kraft's website looks way more tomato-y than mine. And to be honest, I don't know if I would have made it had it looked so tomato-y!


COOK pasta as directed on package.
MEANWHILE, crumble meat into large deep skillet. Cook on medium-high heat 10 to 12 min. or until cooked through, stirring occasionally; drain. Add spinach and tomatoes; cook 2 min. or until spinach is wilted, stirring occasionally. Remove from heat; cover to keep warm.
DRAIN pasta. Add to skillet along with the cheeses; toss lightly. 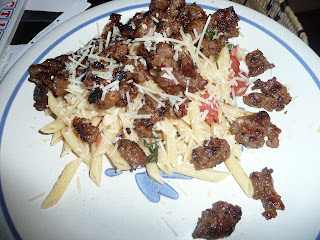 Here is the meal WITH the meat 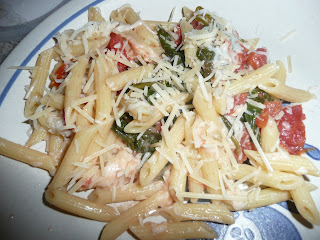 Here is my meatless version

1. Was the recipe easy to follow?
I really don't think it could have been any easier. It was also rather quick. The only problem was it dirtied up 3 pots/pans (it would have only been 2 if I cooked the meat together with the tomatoes)
2. Did the dish taste good?
It was REALLY yummy!

3. Would you make it again?
I will definitely be making this again. Especially when I need something quick to whip up.
4. Leftover quotient?
There is probably enough pasta left for 1 more meal for the two of us. And enough meat for Adam for that meal.

5. Any additions/edits to the recipe?
-I (of course) threw in more cheese than the recipe called for
-I cooked the meat separately and just added it at the end to Adam's plate

6. Adam's thoughts?
"I really liked this. Well, except for the tomatoes....and the spinach."
Adam has a thing about chunky tomatoes so he ate around them. And he ate around most of the spinach. But he agreed that it gave a lot of good flavor and didn't mind them being in there.
Posted by Stephanie H at 5:00 AM

I didn't know Adam doesn't like chunky tomatoes!! Just like me! I remember being forced to eat them once in Maryland and getting very upset.

That looks SO yummy, Steph!

looks like a great recipe...gonna try it myself real soon..Thanks for sharing..........

Looks delicious. I am definitely going to make that this week! I have to admite that though I really like Italian Sausage, your plate looks yummier than Adam's.
Love, Mom