It's Been A Crappy Week (Literally)

This Wednesday was going to be an exciting night. It was the first night of "Adam wants to be Catholic" class. Adam has decided to join the Catholic church, so he will have class every Wednesday night from now until April when he will be confirmed at the Easter Vigil service. Contrary to popular belief, both parties do NOT need to be Catholic to get married in the Catholic church. Just one needs to be Catholic. I never asked him to do it or suggested it in any way, it is something he has decided to on his own and I am very excited. I love that one of his reasons is that when we have kids, he wants both of us to raise them together with our faith.

So on Wednesday night we were on our way out to church when Adam heard a dripping sound in my garage. We stopped, looked around and noticed a drop coming from the ceiling above an empty bin. 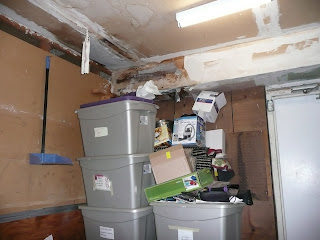 See the bin stack no the left. The top bin is empty and was catching a ton of water
We couldn't believe it. I own my townhouse and it is two stories tall. It is attached to my garage, but above the garage is another unit. There are four garages in a row and above all 4 is someone else's. Adam knocked on the door and the people who live there came out while I called my association. I reached the answering service and left a message. The lady who lives above the garage is a renter and she said she called her landlord last week about her toilet leaking from the bottom and it is bubbling all over the place, but he didn't come to fix it. Gross. So Adam called the landlord who wasn't home. There wasn't anything more we could do so we left.
We got home about 10:00 from church, stopping at my parent's house and grocery shopping so I could make pasta salad for the potluck at work. That is when I noticed more dripping. By that time the whole soffet was almost pouring out liquid. We realized EVERYTHING was soaked. Adam called the landlord back who was annoyed to be inconvenienced by this and we called the association answering service again where Adam insisted on speaking to someone. 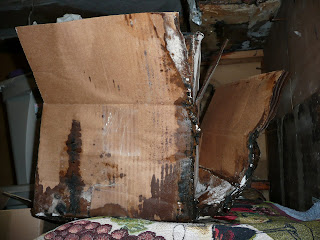 A box I had on the shelving unit. Underneath are all of my holiday rugs rugs that I have for every season (for the kitchen and front door) that are soaked. 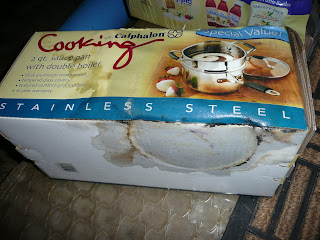 My poor new double boiler. I stored it in the garage next to the fondue pot because I don't have enough room in the kitchen. Anyone want to come for fondue this week? 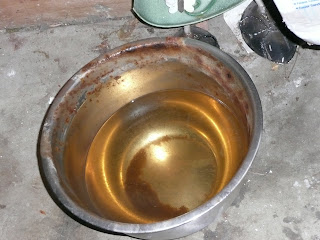 The fondue pot and double boiler were also next to my punch bowl. Punch anyway? I know....seriously gross. But I just had to include it. 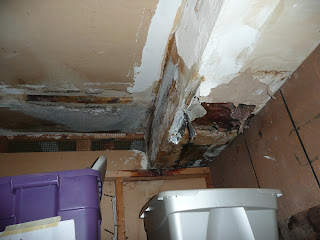 This is what damage happened. I didn't notice it until Wednesday, but how often do you look in the corner of your garage. Especially because when I leave in the morning it is fairly dark and it is also almost dark by the time I get home! 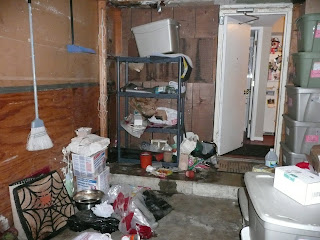 Here is all of my stuff spread out all over the garage. 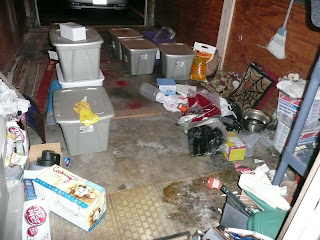 The view from the other angle of all of my stuff that is completely ruined.
On Thursday afternoon Adam met the landlord of the unit above at my house. The landlord said that it isn't his problem. Adam said, "WHERE do you think it is coming from then??" and he said he wouldn't pay for it. Well...he has to. But I can't wait for a battle with him. So I had to file a claim with my homeowners insurance. I talked to them Friday and the cleaning people came out Friday afternoon. They started drying everything out with a huge fan and dehumidifier, however, they can't get started ripping stuff out until the association gives them permission. Anything above the drywall in the ceiling isn't "mine" so they can't touch it.
Grr to living in a townhouse.
Now I have to wait until the association lets them know what they can do. And I have to hope that my insurance company is able to go after the association or landlord to get paid and get my $500 deductible back.
Let me tell you, when you are trying to plan a wedding and have to pay $750 of deductibles within 2 weeks...it is not good. My poor car is still in the shop being repaired, which may be a good thing, because there is no place in my garage for it now!
Posted by Stephanie H at 7:38 AM