On Saturday I taught a CPR class for Adam's brother, his girlfriend, and Adam. We did a class last year with more of the family, but these were the only ones who could do it this year. We did adult, child, and infant CPR and adult and child AED. It is supposed to be a 7.5 hour class but it ended up going on forever because we had to take a break to go pick pumpkins and save them from the frost (pictures later). We didn't end up finishing the whole class until 10:00 (9 hours!).

For the infant portion of the class, we used baby dolls to save on money (since they have done it on the manikins before). I raided Mom and Dad's house and ended up with two of sister-Erin's baby dolls. I was laughing so hard wondering what Erin would think about it!

We really had a laugh when the doll Heidi was working on (Ashley) started passing gas! She is one of those dolls that ate and then....it came out of the diaper. So when Heidi blew into her mouth....it came out the....diaper area! We couldn't stop laughing. Austin's doll is a doll that makes a noise that is supposed to be crying by sounds like a dying cat. So every time he flipped her back and forth when we did a choking conscious infant...she sounded like a dying cat!

It was hilarious! Thank you Erin for the use of your dolls! 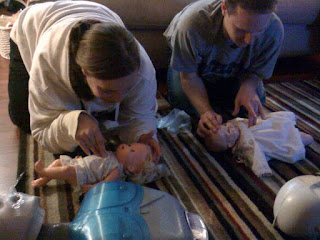 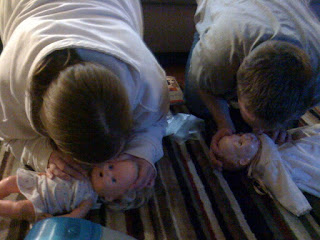 (Sorry about the quality of the pictures. I left my camera at Mom and Dad's, but Heidi let me use her iPhone.)
Posted by Stephanie H at 8:20 AM