Frozen Pipes or Finding Rain in the Garage in the Nude

What the heck is that sound?

I looked outside. No rain.

I walked downstairs (side note: I have a lot of hair so if I blow dry it in my clothes I sweat a lot. So...I usually do it unclothed). I still heard the rain. I thought the sink might have been left on. Sink wasn't on. I walked around the corner in the kitchen and saw a lake on the kitchen floor. What the....?

I opened the garage door because I heard the sound in there (still unclothed and one contact-ed) and.... 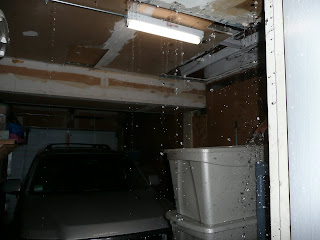 .... that is what I found. A torrential downpour in my garage. You know how hard it is to catch water on camera. This does not do it justice.

That is more what it was like.
So I ran upstairs and called Adam (who was working in INDIANA yesterday) in a panic and he said to go to my neighbors house and try to find the main shut off. I knocked on said neighbor's door (after throwing on some clothes of course) and asked for help. He told me that the water can only be shut off by the village. Well of course the Village isn't open at 7:30 in the morning. So I called the police to ask for help. They sent a police officer who tried turning my water off even though I explained that it was the water for my neighbors unit because THEIR pipes are in MY garage. Remember this?

The police officer called the fire department. A fire truck came.
Meanwhile I pulled my car out of the garage and tried to pull my 10 bins of holiday decorations out from under the waterfall. Then I was soaked. And it was TWO degrees outside. And the water was gushing out from the front of my garage. And freezing. So there was an ice rink.
The firemen and the police officers were traipsing around my house and my neighbors house trying to shut off the water. They couldn't. Finally Public Works got there and shut off the water for the entire building. 50 minutes later. 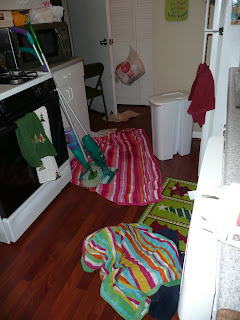 After the water was off, I finally went back in and soaked up the lake.
And put in my other contact. 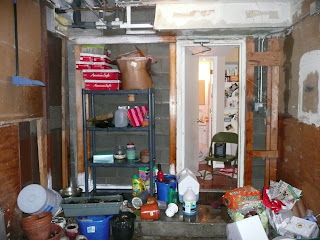 Everything in my garage totally soaking wet.... 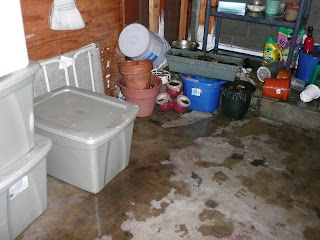 AFTER the fire fighters squeegeed the water out. 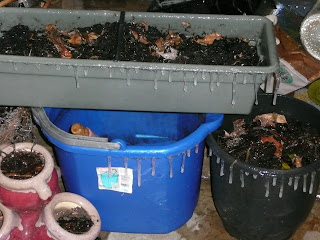 As you can see, everything wet was freezing with the garage door open.
After several calls to my insurance company, the association, etc. The association finally sent a plumber over. The landlord of the unit above the garage also came by. The association said paying for fixing the pipes was the landlord's responsibility and he agreed (gasp!). It took them a couple hours and many times turning on the water just to find another leak or that it didn't take with more water spraying everywhere before it was finally fixed.
I also found out that all of the water damage falls under my insurance's responsibility because the damage is in MY house. "That is what insurance is for" is what I was told. So another $500 deductible was paid.
Then the water restoration/clean-up crew got there. They found that the water had soaked underneath my beautiful laminate floors that dad put down and they had to be ripped up. Also one cabinet got ruined with water and several walls were wet in the kitchen. 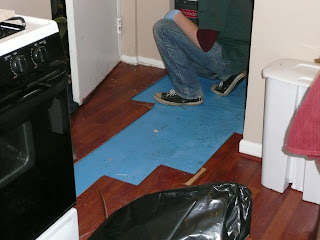 It was like a stab through my heart every time they ripped up a floor board. 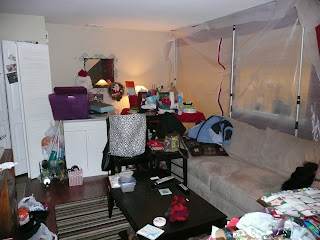 My living room now. The kitchen table, a kitchen cabinet, everything from INSIDE my cabinets and the chairs are all in my (already small) living room. Also, there is a barrier up so that their dehumidifiers and huge fans can dry out the kitchen and garage. 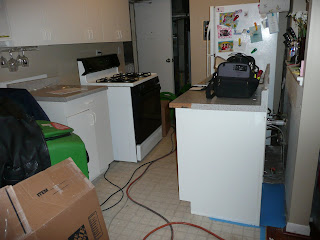 And...my kitchen. The flooring was all torn up and everything moved around.
The estimate I received today to repair everything is $8,263.21. So I guess thank goodness for insurance. $500 is much better than $8,000. Also thank goodness for my amazing Mom who came over last night to babysit the clean up crew (more on that later) as well as during the day today so I didn't have to take another day off work.

Well...yesterday wasn't so much taking a day off work as my call to Bridget at 7:31, "I can't come in! It is raining in my garage! I'll call (boss' name) later! Please take my class!". About 8:00 after the fire dept and everyone were there (but the water was still pouring) I called the principal and explained in a still panicked voice what was happening and I had nothing planned and I couldn't come in. My principal is amazing and understanding and said everything was OK and to call her later to let her know how things were going. My assistant is wonderful and even though I forgot to remind them a parent was coming in for a birthday and we had an assembly to go to in the afternoon...she handled everything well and it all went smoothly.
Moral of the story....
Don't walk downstairs naked?
Finish putting the other contact in?
Know how to shut off the water?
Don't keep anything in your garage?
Don't buy a condo where your neighbors plumbing is in your garage? (I guess I will go with this one)
Posted by Stephanie H at 5:34 PM