I am a Tile Smasher

Today I tackled the project of removing the tile from the entire downstairs bathroom. We hadn't really planned on doing anything with this bathroom yet...however now are are. There was this vanity/counter-thing in the back of the room covered in tile. But many of the pieces were missing (see picture below), so we couldn't exactly leave it that way. Then....if we tore out the counter, we would have to tear out all of the tile because...well...it would look terrible.

So that was my project for today. I was a little worried because you have to be awfully strong to whack the prybar with the hammer up so high. But I was pretty proud of myself and made fast work of it. It was all completely (*mostly completely) removed before Adam got home from work!

*Mostly because we couldn't get under the vanity until it was removed. And there are two columns behind the toilet that we can't get until the toilet is removed. 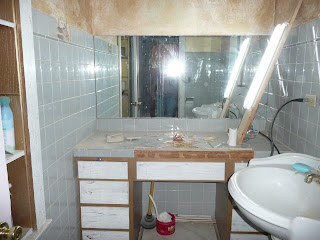 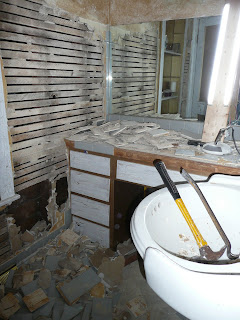 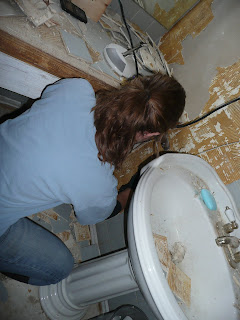 Amy came over just in the nick of time. I had the last section to do behind the sink, but being right-handed was hindering my ability to remove the tile because I needed to swing left-handed. Left-handed Amy saved the day! She finished removing the tile behind the sink. 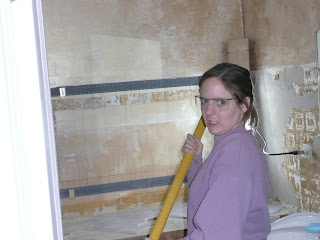 Then came time to remove the counter/vanity thing. Adam thought I could do it with the sledge hammer. I had no confidence in myself, but I tried. I was right. I barely made a dent with the thing. Thank goodness for my manly and super strong fiance. He made fast work of it. 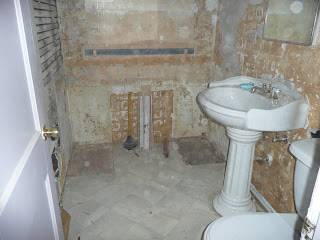 The finished bathroom. We removed every piece of tile! Now we just need to figure out if we will drywall right over it? Or if we need to remove all of the lath and plaster (concrete) first? Yuck! Although we hadn't planned to do it. I am excited that we will be able to start "fresh" in this bathroom. Especially because this is the one people will see!

My super strong fiance showing me how it is done! Thank goodness!