Removing Wallpaper or How to Save Your Marriage Before Beginning it

Saturday I spent with my absolutely amazing future sisters-in law....sister-in-laws?...removing wall paper from the dining room in my future house! I don't know what I would have done without them. Actually I know. I would still be crying in the corner and would have missed the awesome Wii Fit party! This has been a task that has stressed me out for a while because I have never removed wall paper but know it is a terrible task. I decided to tackle it on Saturday and the girls generously agreed to help (the boys were working on other jobs). Adam and I read and article called "How to Remove Wallpaper and Stay Married" and what we got out of it pretty much was not to do it together! But I did read several articles about the different schools of thought...Dif, hot water, steamer, scoring, no scoring, fabric softener, closing your eyes and hoping for a wallpaper genie... 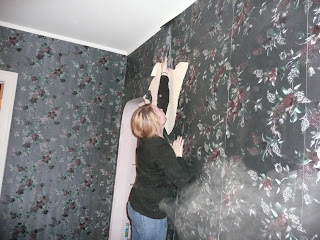 Here is Amanda pulling off the first layer of wall paper (you can see the steam from the steamer Kristin generously lent me in the corner). We figured out that the top layer came off well and it was easier to just pull that off in large chunks. But wait. Yes, look at that wall paper. Shiny. Dark. Very Dark. Purple Flowers. Upside down. Yup. 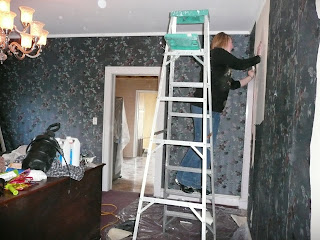 Aaaand....there it is again in case you didn't realize the horridness of it the first time! And don't forget to check out the dark purple carpet in future pics! 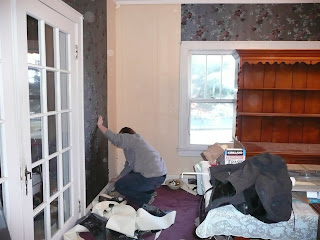 Here is Heidi helping to tear off the top layer of paper. 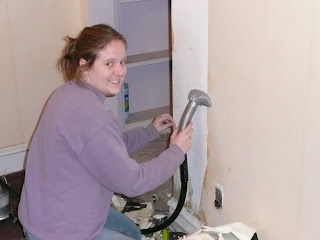 After that we got to the fun task of removing the adhesive backing. I started using the steamer and it was going extremely well. But then the men started harassing us and convincing us that Dif was the only way to go. 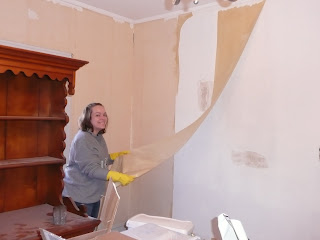 So we tried it and....it was amazing! The adhesive backing was pulling off in sheets! Right in front of our eyes. We were sold. We were ready to become fans on Facebook. We were amazed! 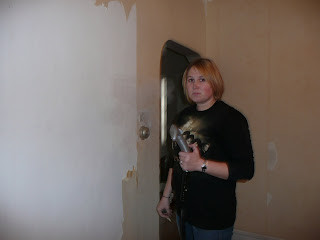 And we were teasing Amanda (who was using the steamer) that now she was lame and Dif was the way to go. 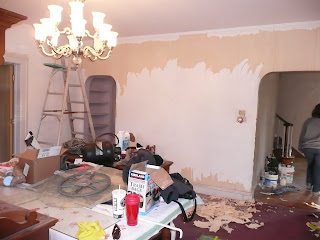 Yah...but then that was the only wall that was so easy. After that....it was pretty much terrible. Dif or steaming, we had to scrap off every little piece, piece by piece. No large strips were coming off any more. I guess it is good we started with the easy wall, because otherwise we would have given up. The steamer proved really good for the stubborn pieces especially against the trim and baseboards. And then Dif did help. But we had to scratch every little square inch off individually! 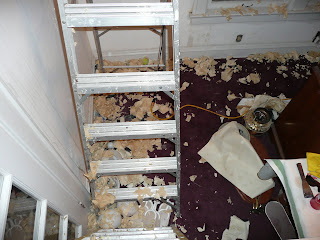 And we may or may not have forgotten to put plastic down throughout the whole room. But we are getting rid of the *lovely* carpet anyway...so who cares? Right? Just tell me right! 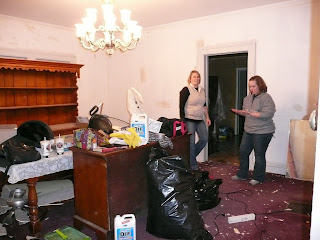 The final project!
You definitely need to go back up to the top to see the "before" picture again. Because it is amazing. Even unpainted and scuffed...I will take these walls over the funeral parlor wallpapered ones! It was an amazing team effort and we were scraping the last pieces off at 4:40 when I had the girls showing up at my house at 5:30 for the Wii party! I FLEW home, showered and got ready and was ready to go on time! Adam and I are super excited to have another project crossed off the list and now we can't wait to pick out an area rug and paint for the room. But I am not looking forward to the next "me" project of removing the straw like wallpaper from the kitchen walls. Yah. Wait for those pictures!
Posted by Stephanie H at 5:00 AM