So tonight I went to the coolest party ever! It was a Nintendo Wii Fit Plus Party hosted by the lovely Rachel who is a Brand About Town Nintendo Enthusiast! Rachel invited Erin to invite me and Katie and I didn't have to think twice before saying "yes"! It was downtown in an adorable loft. Katie and Erin met at my house and we braved the city traffic and they made it there with their nails intact even with my driving! We did have a bit of a harrowing experience when I couldn't get in the right lane and the GPS kept recalculating and then we couldn't find the parking lot, but then we found the street and had great street parking right in front! 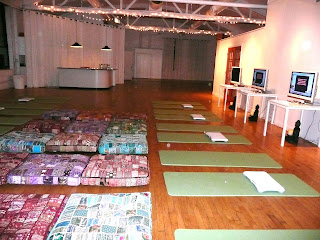 When we walked in, this was the adorable set-up we saw. 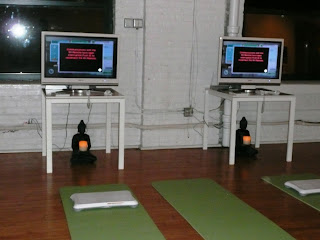 There were even cute little Buddha statues with candles under the TVs. 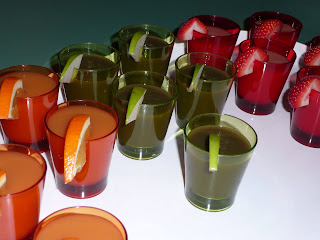 We got to mingle and have some yummy smoothie shots. 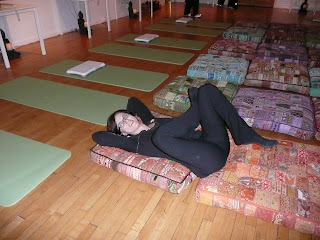 Our lovely hostess relaxing on the cushions. 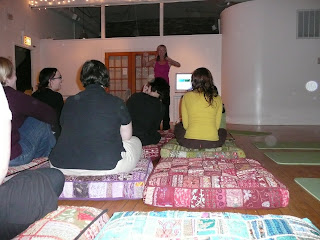 After the mingling we sat on the cushions and our adorable Nintendo rep introduced us to the new features of the Wii Fit PLUS. She had silly jokes that made us laugh even though they were lame. But preschool teachers are easily amused like that. After that, we each got to pick a TV and practice a yoga routine they had set up for us. Yeah...I totally couldn't keep my little red ball (my balance center) in the middle. And the tree pose is pretty darn hard! 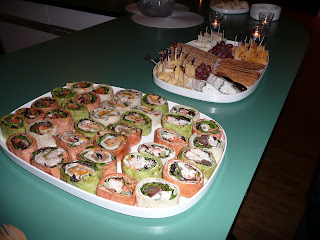 After that, we got to snack on some yummy foods (and LOTS of cheese). 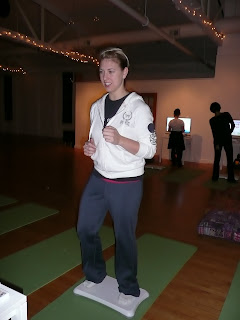 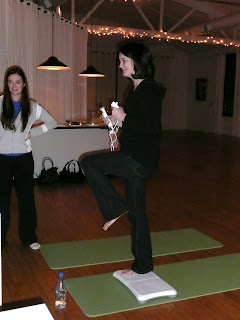 Then it was back to practicing games. We could practice any games we wanted. I was pretty much terrible at the Circus Juggling game. And then my Wii kept running itself off of a ledge on the Obstacle Course game. But I can totally see how this is a good workout, but you just feel like you are playing games! 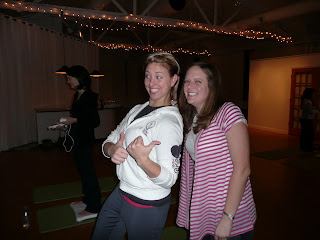 I took a break to drink some wine and interrupted Katie's game to make her pose for a picture! 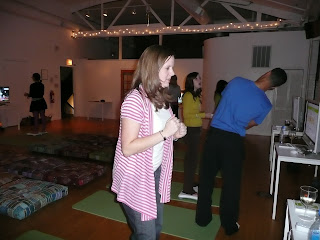 Me working hard at the obstacle course game. 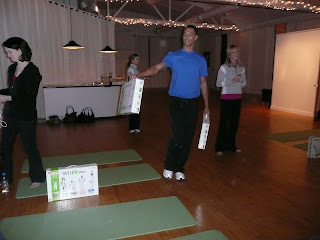 Then they busted out with Wii Fits with a Balance Board for EVERYONE! Seriousy. A Wii Fit Plus for everyone. Just like they were candy! 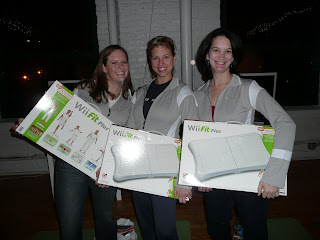 And we got these snazzy Wii Fit Plus jackets!
Overall, this was a TON of fun and totally worth the drive into the city. I cannot believe that I got a free Wii Fit Plus just for playing some games, eating some yummy cheese and drinking wine! Now it is going to be even harder to wait until Christmas to open up the Wii that Adam and I bought for each other for Christmas. I want to bust it out and try my hand (hips??) at hula hooping again!
Posted by Stephanie H at 10:43 PM