I had a total dinner success on Monday night!

First, I decided to make Jessica's Rosemary-Garlic Chicken recipe. I wanted something to go with it, so I searched for a cranberry rice recipe (don't ask where I got that idea from) and found one here.

They both turned out as huge success. The only downside was the rice recipe took FOR-EV-ER! Good thing I am on spring break. Oh, and it made A TON. Leftovers anyone?

Directions
1. Using a rolling pin pound the chicken breast halves between 2 sheets of wax paper until they are of uniform thickness.
2. Heat the oil and garlic in a large skillet over medium-high heat until the oil shimmers and the garlic browns. (Don’t burn the garlic.) Add the chicken breasts and cook until golden, 3 to 5 minutes on each side.
3. Add the salt, pepper, vinegar, chicken broth, and rosemary. Cover, reduce heat to medium-low, and cook 3 minutes longer or until the chicken is fork-tender. Remove the chicken to a platter and keep warm.
4. Increase heat to high and boil the sauce until thickened or syrupy, 3 to 5 minutes. Whisk in the butter and pour the sauce over the chicken.

My notes:
-Adam says this was really good and he would like me to make it again. I have to trust his judgement!
-I used red wine vinegar instead of sherry vinegar
-I used fresh rosemary (and my slap chop was awesome for cutting it!)

Directions
Melt butter in large saucepan over medium heat. Add onion and celery and cook, stirring often, until softened, about 4 minutes. Add wild rice and cook, stirring, for 1 minute. Add stock, salt, thyme and pepper. Heat to a boil, reduce the heat to low, cover and simmer until rice is tender but pleasantly chewy, about 45 minutes.

Remove from heat and let stand, covered, for 15 minutes. (Drain the wild rice of excess cooking liquid, if necessary.) Add the wild rice mixture and the toasted pecans to the cranberries. Toss to mix well. Use as a turkey stuffing or bake separately.

To bake separately, heat the oven to 350 degrees. Place in a buttered 13 x 9 inch baking dish. Bake, covered, until heated through, 30-40 minutes.

My notes:
-Apparently I didn't add the "savory" seasoning because I didn't notice it until I was done with the recipe. So..it was fine without it.
-I used vegetable broth instead of chicken broth
-I baked it in the oven (obviously)...I didn't stuff it in a turkey.
-It made a ton. I would probably try to halve it in the future.
-I seriously loved this. I think the cranberries add a really good texture and flavor to the rice. Adam really liked it too...however, he picked out the cranberries. I just don't understand!


I also sauteed some spinach with garlic and olive oil and added some balsamic vinegar and Parmesan cheese over the top. Adam's plate is below with his "no thank you" portion of spinach. My plate had more and it was yummy! 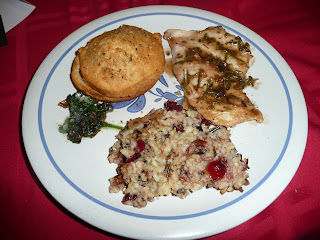 I really would like to cook more, but it is so time consuming to pick a recipe, shop for all the ingredients, and then actually do the cooking. Between every step I was trying to get some homework done. Maybe it will be easier when I no longer have homework to do. It just adds a level of stress hanging over my head all the time. But seeing recipes posted on blogs definitely gives me a kick start because A. I can see a picture of it and B. I can read someone's first hand experience about it.