One of the fun things I actually did over spring break last week was get together with a couple of my friends/bridesmaids and work on making our wedding invitations. We are making part of them and we ordered part of them.

All you can see here are the various pieces....so I don't think it is going to give anything away!

We got a lot done that day....but there is also a lot more to do!

We ran into a bit of a snag before invitation making day because the part we ordered from the invitation company came wrong. They arrived and part of a word was cut off. How did they do that??? Didn't anyone look at them? It wasn't like that on the proof we saw! So my mom very nicely took care of it for me because we needed to get them fast so we could work with them on invitation making day. We agreed to move one of the words up a line because they said there were too many words on the line. !?!?! Why didn't they tell us that before?? So they sent the new proof, mom checked it for the wording (I was at work) and sent it off to get reprinted so we could have them in time.

Fast forward to the day before invitation making day and we open the new box and they TOTALLY changed the spacing. They moved the whole thing down about an inch. ?!?!?!? Why???? I did NOT like it. But I also didn't want to start this whole process over again. We called and they were totally rude about it. They said A. We could return the whole thing for a full refund minus shipping (which I didn't want to do because I love the design) B. We could return them and print new ones and pay for them (which I didn't want to do because that would be a waste of money) or C. We could use the messed up ones and they would give us a 25% credit (which we decided to do). But with the option we picked...now we had to redesign the invitation. So....we did that.

Also...
Yes....we approved the new proof, but we were only checking for the wording (that THEY cut off last time) not realizing they (for some unknown reason) changed the spacing. Until that point, they had been wonderful to work with. I was so angry that they were so unforgiving about this. They are getting a nasty letter.

After freaking out about the whole thing and wanting to scream at them for being so rude about THEIR change to the invitation.....I got over it and realized the new design was cute too.

My current belief are there are much bigger things to worry about than little things like this (like losing my job....trying to finish school....)!

So on invitation making day we had a ton of fun! We worked hard all afternoon and felt very accomplished. Thank goodness for wonderful friends. 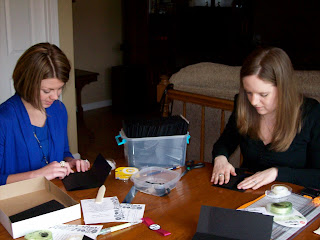 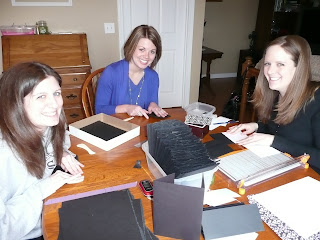 Posted by Stephanie at 8:58 AM