Adventures with the Cat or $500 Later

I have some wonderful pictures to post of the amazing shower my bridesmaid threw for me this weekend, but I am waiting to get some other photos from some of the other girls before I do so.

So for now you get our adventures with Fudgie the cat!

Adam has a cat named Fudgie. It is his cat by default. It was his mom's cat, but then she up and moved to Hawaii and that story is for another day. So Adam is the owner of Fudgie. He has been feeding her and playing with her for the last 4 years, but in her whole 7 years she has never really been cared for the way a cat is supposed to be cared for. And she has never visited a vet or had her shots.

The problem is that I am allergic to cats. But some cats are worse than others. Sometimes I am fine like when I go to Kristin's house. But when I visited sister-Erin's house in Morocco I was in terrible shape after 2 hours. So we decided to bring her to my house to see how I reacted to her. When I spend time with her at Adam's, it isn't really a good judge because there has been so much construction that there is a ton of dust in the air. But the problem with bringing her to my house was that she scratches quite a bit and I don't want my stuff scratched! So we researched online and found these "Soft Claws" (and no, we didn't get the bright pink ones...this time).

Last week sister-Erin came over to help trim her nails, because that also hasn't been done. Then yesterday morning we decided to put on the Soft Claws and it went really well. Before we did that we went to the Pet Store and got her a climbing/scratching post thing and also some toys and a new litter box (just a really cheap one). Then we brought her over to my house. She seemed to be shedding a TON yesterday. Imagine picking her up and your shirt immediately covered in a blanket of fur. Seriously. It was 4 times worse than the worst shedding you can imagine. So I was brushing and brushing her and each stroke of the brush took off a huge clump. It was getting everywhere and I didn't want that fur ALL over my house. 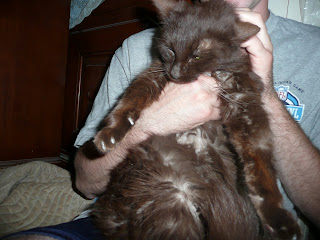 You can see the little plastic tips on her claws here. She totally let me put them on no problem!


So Adam ran up to the pet store again and got something called the "fur-inator" or something like that that is supposed to be really good for getting rid of loose hair and the undercoat. So we were using that and getting rid of a ton of hair, but it was still everywhere. Meanwhile we noticed white dandruff-like flakes on her. We googled it and of course came up with all kinds of scary and disgusting things it could be and I said, "She is NOT walking around my house if she has bugs on her". So then we locked her in the bathroom and headed up to the Pet Store again.

We talked to a lady there that recommended a moisturizing shampoo that we bought. I still was worried about bugs though and so we stopped at the Vet that is attached to the Pet Store. They had an appointment still open that day and since Fudgie had never been to the vet and had no shots, we decided this was as good time as any to take her.

So we headed home to look for the cat carrier in the barn (which we miraculously found immediately). We brought her to the Vet and she did super well! The vet checked her out and she looked really good. No bugs and the white stuff was indeed dandruff from dry skin. So she prescribed a special spray conditioner. The vet was worried about her size though, because she is tiny. She is only 5.7 pounds and a grown cat. So they wanted to do $215 worth of tests on top of her vaccines and special spray. I was leery about agreeing to it, but Adam pointed out that if it was something easy like her thyroid, we could fix the problem with medicine every month. So we did the tests. 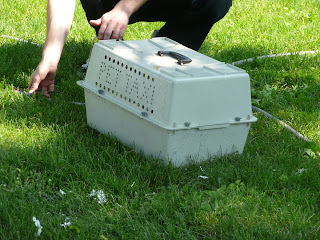 Rinsing out the cat carrier 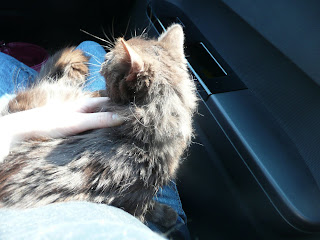 Fudgie sat in my lap on the way to the vet and then we put her in the carrier to take her inside. 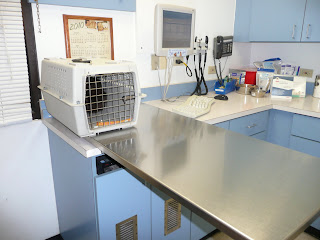 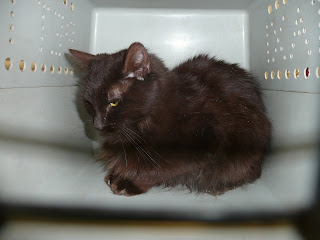 She was so cute just sitting in her cage.


We brought her home and decided to give her the bath, which she handled like a champ! We washed her with the shampoo and then sprayed on the conditioner. She looked so adorable all wet. She was so good the whole time. In fact, we were starting to get a little worried about how calm she had been through everything all day. 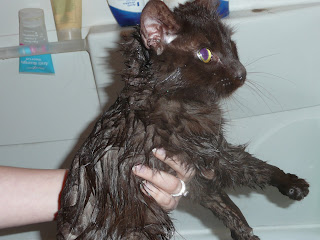 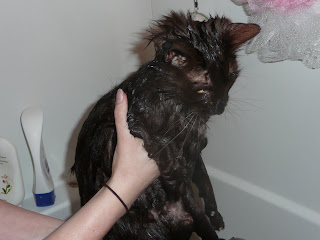 We made a home for her in my bathroom with a cheap litter box, her bed, and a mat with her food dishes. I want to buy pretty food dishes if we keep her, but for now this will do.

Her little set up

Later Sunday night we got a call from the Vet that the bloodwork came back and her Thyroid was fine, but her calcium was high. It could be just high calcium but it could be cancer. =( They want to do another calcium test and then if that is high then do ultrasounds and xrays. I think we will do the second calcium test, but we draw the line at xrays and ultrasounds. She is happy and living a good life now.

Monday she was doing great and back to her normal self. She is exploring my house and having a grand ole time. We are praying that everything is fine with her and she just continues to be the happy sweet cat she has always been. And that I am not too allergic to her! 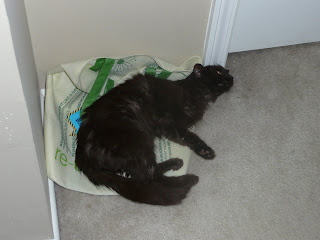 Any pieces of cat-owner advice you can share would be greatly appreciated!
Posted by Stephanie at 9:19 AM