Remember when I got it in my head I was going to give Fudgie a bath myself tonight?

And she wasn't at all calm like last time?

And when she was soaking wet because I just poured the bucket over her to rinse her off, she got out of my arms and started running around the house like a crazy cat, sopping wet?

And it was not good and it was scary for her, but completely hilarious that a dripping wet cat was tearing around my house? And normally I wouldn't think that was funny because I don't like my house getting ruined....but seriously? It was hilarious.

But then l I trapped her and dried her and then she was fine? 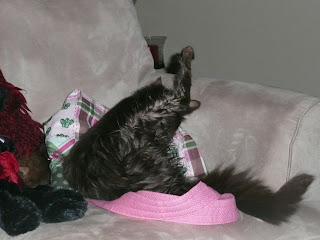 This is her after I was able to dry her off some more with the towel. She was doing odd gymnastics moves with her leg straight in the air. I had time to get my camera for this! 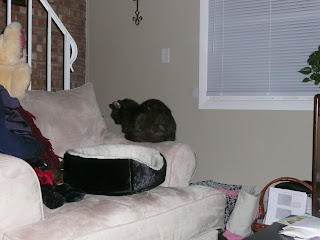 She must have been angry at me because while we were watching TV she suddenly turned herself around to face the wall and wouldn't look at us. But then I was petting her and she totally chose getting petted over being angry with me.
But remember when it was hilarious that she was soaking wet running around my house?
Posted by Stephanie at 12:34 AM