Downtown for the Day

Hi, my name is Stephanie and this is my blog.

I thought I should introduce myself since I have been absent for so long.

Also, I probably should duck because this post does not contain wedding pictures. But there is a reason for that. I don't have any of them! But hopefully today I will get a CD from my sister of all the pictures she has. Also, I wanted to start with all the pre-wedding festivities, but I don't have all of the pictures of those events either!

So instead you get our day yesterday, downtown.

It all started because my mom bought the Groupon for Chicago Sailboat Charters and we wanted to take the trip before my sister's boyfriend, Wael, returns to Egypt (today). Then Adam and were given Cubs tickets (woo hoo!) and we decided to make a day of it.

My dad grew up on the Chesapeake Bay and grew up sailing. We have been sailing several times and have enjoyed every second of it. I have never experienced sea sickness on a boat until recently on our honeymoon, but the waves were pretty terrible. Because I was slightly worried, m wonderful husband ran out in the morning to get some Dramamine just in case. I decided not to take it because I didn't want to fall asleep afterwards (the less-drowsy formula still makes me dead tired), but I had it with me. 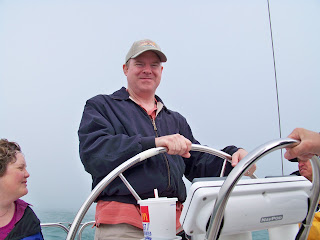 My dad spent some time steering the boat 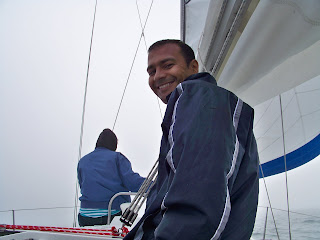 This was sister-Erin's position most of the boat ride.
Not long after the ride started, Erin and Wael requested a Dramamine. He ended up spending pretty much the entire ride in the head (aka the bathroom) and she spent the remainder of the ride on the front of the boat and leaning over the side. Because of my sister's "difficulty" with the ride, and Adam's inability to see someone else be sick, we had another one "bite the dust". Mom even had a scare for a bit, but she kept her breakfast down! 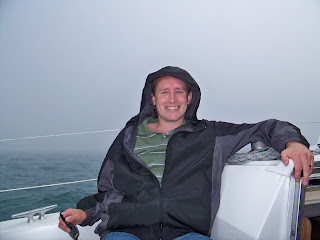 As you can see from the picture it was an incredible foggy and choppy morning out on Lake Michigan. But I was fine! Well, mostly fine...until 4 other people were getting sick and talking about being sick and then my stomach started prostesting a little...but then I was fine. Dad was the only one not affected. He is like a superhero!

Nonetheless, we ended up turning the boat around and heading back into shore. Dad said, "When more than half the crew is down, it is time to turn around!". About 45 minutes after we got back, the fog lifted and it was a crystal clear day on the lake. Bummer dude. 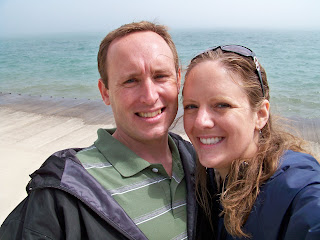 After we got back to the shore, Erin and Wael laid down in the car for a bit and Adam and I sat by the lake.
After everyone recovered a bit, we all went to Rainforest Cafe, so Wael could experience the rainforest, Illinois style. We had a very yummy lunch! 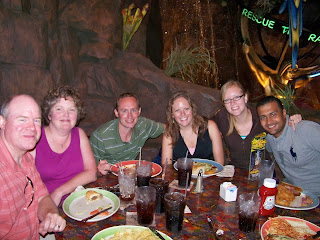 After lunch, Mom and Dad headed back to the 'burbs and the four of us headed out to wander the city before our Cubs game. We went to Navy Pier and got some yummy ice cream and then just walked around a bit. By that time pretty much all the stomachs were back to normal, but still...no one was up for a Ferris Wheel ride. No need to push it! 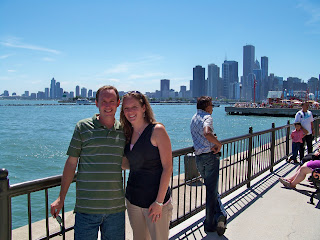 Newlyweds in front of the skyline 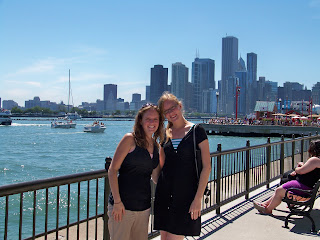 Sisters!
After our afternoon downtown, Adam and I headed to Wrigley Field to enjoy the Cubs game. It was a beautiful night and we had a lot of fun. Even if they lost! 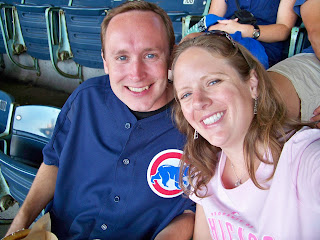 Us at the game!

The famous Wrigley Field
(I was messing with the panorama function on my new camera and it turned out pretty cool. )

Even if the day started out a little rocky, overall the whole day was a blast. It felt naughty to spend a day not working on the house, but I have found that I have really been craving time together and the house will be done when it is done!
Posted by Stephanie at 10:04 PM