I Live In a Zoo

So apparently I live in a zoo.

You already know about my adventures with Fudgie the cat (she isn't being evil today).

My other adventures started on Wednesday. I was walking to work and in the field I saw this animal. My first thought was, "Why is a raccoon out during the day?" and then realized it was no raccoon. Then I thought, "Beaver? Woodchuck? What does a woodchuck even look like?" I reached into my purse to take a picture and then it disappeared (the animal, not my camera).

I asked Adam about it later and he said it was a groundhog. (Which I learned from my best friend Google that a woodchuck and groundhog are the same thing.)

On Friday when I was walking through the field to work I saw it again! Just sitting there eating a pear that fell from the pear tree. 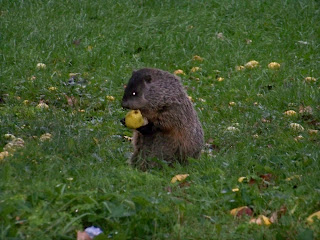 Isn't he cute??? He is my new friend the groundhog.

He let me take a couple pictures of him before he ran off into his home. 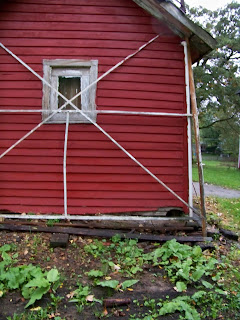 His home is apparently our pump house. But he isn't hurting anything. And he is cute. And we don't use the pump house. So February 2, you are invited to gather outside our pumphouse to see about spring!
Then came Friday night. When I encountered some more animals that are not so welcome. 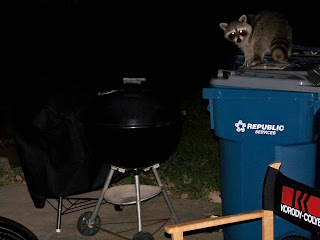 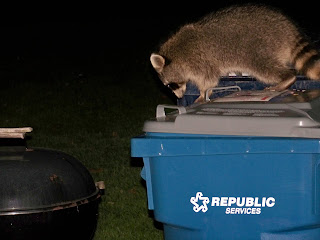 They were actually getting the lid off. Stupid smart raccoons!

On Saturday, a friend came by with her Greyhound. While the Greyhound was outside with Adam and we were walking around the house, Charcoal (one of the outside cats) came mosey-ing up to the house. The dog gave a bark and the cat went up the tree! 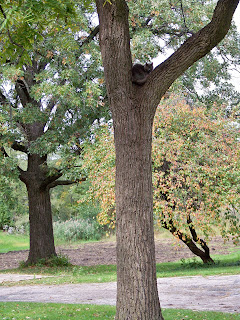 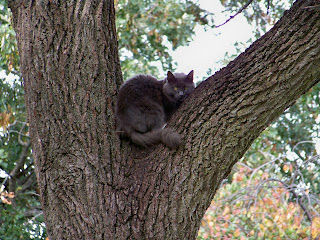 Adam said he had never seen her move that quickly! She stayed up there for quite some time. I think I would pay to see that happen again! The outside cats are pretty nice. Charcoal is friendly and Meower (I know. I know. I didn't name her) is too, she is just more shy.

Then came Saturday night. We were hosting my nephew's 6th birthday party and as we were getting ready to go open presents, someone looked out the backdoor. And there on the steps, where the cat food is, sat a raccoon. Eating all the food. 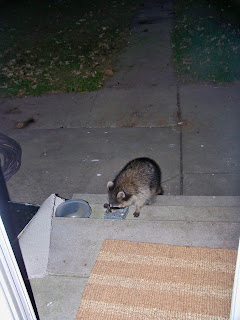 I opened the sliding door thinking he would go away, but he didn't. He let me take several pictures. Then I yelled thinking I would scare him.

He just kept on eating.

So then I walked outside and he looked up at me.

And then kept eating.

Then I walked closer and yelled and he scrambled to finish the food and then ran away.

Stupid raccoons. They are so bold!