A couple weeks ago I decided that I wanted to try making cupcake cake pops. It had been seeing them pop up around the Internet and I thought they would be really cute! I found some instructions here and used that in conjunction with what I learned about when I made my first cake pops for new years.

I thought they were actually a little easier to decorate than cake pops!

My main problem was shape. I thought I was going to shape them by using a Wilton candy mold, but alas, that was not going to happen (too sticky to hold its shape when I pulled them out). I will definitely get one of these cookie cutters Bakerella recommends for next time. Instead, I molded them by hand into a row of little mushrooms (sorry no picture).

The part that made them easier than the cake pops was the decorating. Cake pops you have to be really carefull that when you put the candy coating on, they don't fall off the stick. That means you have to spoon it on and that is pretty time consuming. With these, you dip them by hand first to make the bottom of the cupcakes and put the sticks in. After they have dried for a few minutes, holding the stick, you dip the top in. And they stay on the stick because the bottom candy coating is holding it on there. Much easier than trying to spoon it over the top!

The problem I had was dipping them so the top and bottom were both covered. A lot of them had a bare midriff in between. And no body likes to see a muffin top...er....cupcake top?! I think that problem would be solved by having more evenly shaped cupcakes. Also, I would dip the top in further if I did it again. 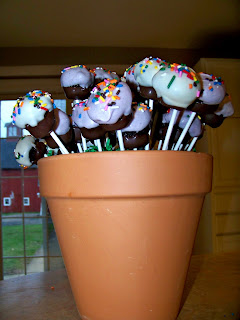 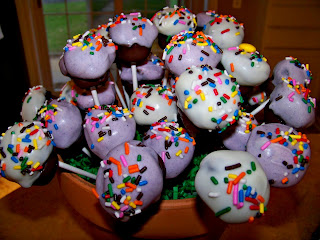 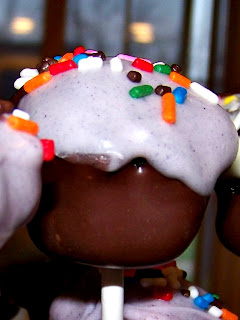 They are a work in progress and I will definitely have to try them again sometime. Even if they weren't perfect, they were yummy
Posted by Stephanie at 4:56 PM

They were REALLY yummy. I ate a lot of them!