Easter was at our house this year because my mom was not really up for hosting. It was OK with me, because I love to have people over!

I have been dying to try the Pioneer Woman's Cinnamon Rolls for quite some time now and because we were hosting brunch, I decided this was the perfect time! I didn't, however, need 70 of them, so I used this recipe to make a smaller batch (I actually doubled this to have about 24).

I spent 10.5 hours the day before standing on my feet in the kitchen; but it was totally worth it! Everything turned out great and we had a fun day.

In addition to the Cinnamon Rolls, I also made the Pioneer Woman's crumb cake. I didn't have fresh blueberries laying around, but I did have a frozen berry mix and it was delicious.

As I said, I doubled the small batch recipe of the Cinnamon Rolls. Which was easy. Until I was a dork. I had been looking at both recipes: one for the measurements and doubling them and then the other for the instructions. Well at one point I looked at the recipe and saw I needed 8 cups of flour. Times two? 16 cups! I didn't have that much flour! So after making the base for the dough, I ran out to the store and bought more flour. I got home and added 16 cups. Well. That didn't look right. Then I checked the recipe again. The ORIGINAL recipe called for 8 cups. The small batch called for 2 1/8. So really? I needed 4 1/4. Not 16. 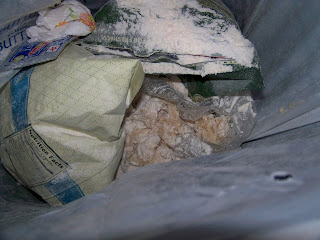 So I had to dump the whole thing in the garbage.

And start all over.

But I went with it and kept on baking and cooking! I set up my laptop on the counter (to the left of the photo below) and watched TV and movies the whole day and night. You can also see my disaster of a kitchen with all my ingredients and dishes everywhere. I much prefer when my sister is over to help before cooking for a family party because the ingredients and dishes don't pile up as much when there's two people working to cook and put away and clean together! 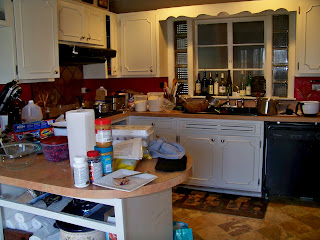 But I finally finished everything! Easter morning we went to church and then hurried back to finish getting the food ready. My uncle helped make the skillet potatoes. They were yummy! 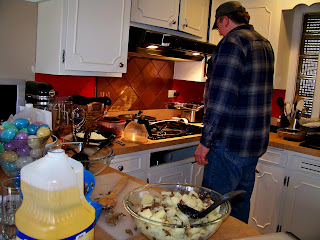 After we all ate a ton of food, the kids opened Easter baskets and then we had an Easter egg hunt in the backyard. It was Adam's idea and I was so excited about it! Another brilliant idea of Adam's was to give each kid a different egg color that they were supposed to find all of the same. And I call myself a preschool teacher! It went really well and I think we found all of the eggs. If not, the lawn mower sure will! 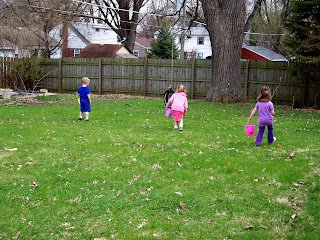 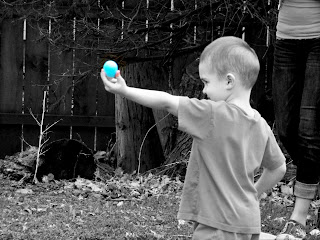 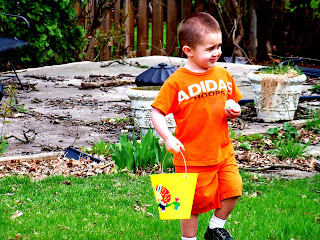 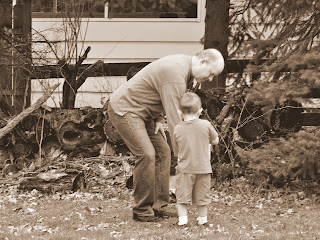 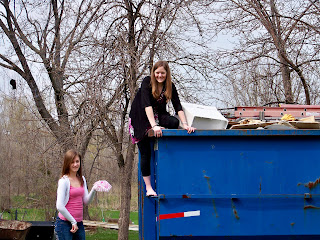 What am I doing?? Climbing up on the dumpster (still there from tearing down the garage) to drop those parachute guys down so their parachutes open up better. Don't worry, my freshman in HS tiny cousin spotted me! 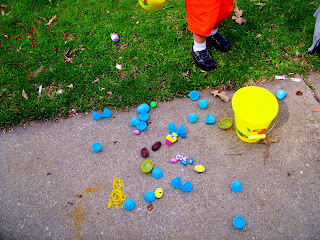 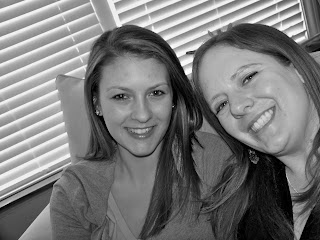 Everyone enjoyed lots of snacks, Easter candy and Christian (my cousin's son) ate candy for about 6 hours straight. Check him out sneaking another piece of crumb cake below: 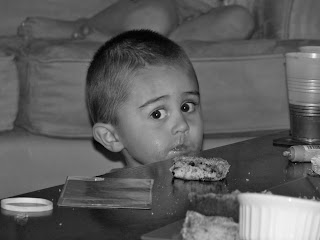 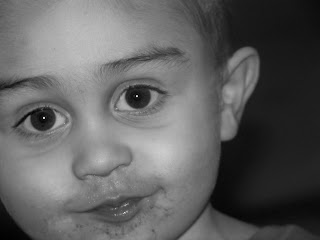 A family party wouldn't be complete without playing some Wii. We didn't Just Dance this time. We Wii Party-ed! We really had fun with the hide and seek game! 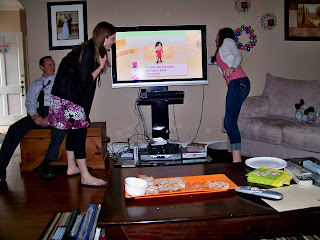 We celebrated Easter with just my parents and my sister the Monday after Easter. What? My mom still makes Easter baskets. So what? My mom is awesome. And my sis and I snuck some things in her basket as a surprise for her. 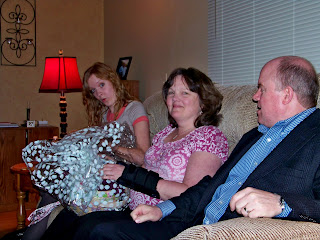 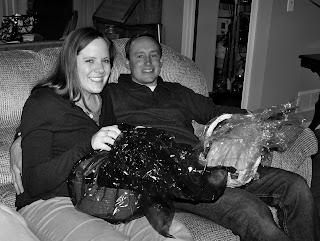 Those are my 5 thousand pictures for my Easter 2011 post. It was another great holiday with family and yummy food!
Posted by Stephanie at 5:00 AM