At school we celebrate "0" birthdays with cake (30, 40, 50, 60, etc). It seemed like a really good idea at the beginning of the year in order to boost morale and have some fun. Now that I have gained a bunch of weight, it doesn't seem like such a good idea! I do think we had an overabundance of 0 birthdays this year, so I hope next year is lighter on big birthdays!

The point? Since I had made cupcake cake pops for another co-workers birthday and a Salted Caramel Chocolate cake for Erin's 30 and half birthday (she was on maternity leave on her 30th) when it was my good friend Bridget's 30th I figured I should do something special.

-Don't make the brownies the night before. They cool too much and don't smush well.
-Don't try to dip dark brownies in white chocolate. You have to do it several times to cover up the brownie.
-Don't try to use the Wilton frosting food coloring to color Wilton Candy Melts. They have a different kind of food coloring for a reason (not just to sell you something else like I thought). It makes the candy melts hard and not good for dipping. As you can see they are a bit chunky.
-They are delicious! 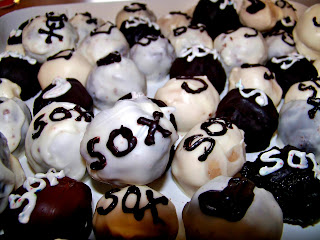 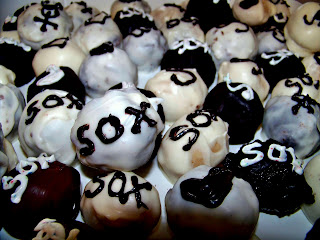 -I used my regular cake pops recipe and also made up a brownie mix.
-I made the cake balls smaller than usual and then put them in the freezer.
-Then I tried to smush the brownies around the cake balls. It wasn't working so well so I put them in the oven a bit to try to make them mushier. That did help a little.
-Then I put the big brownie/cake balls in the freezer again.
-After that I dipped half of them in black chocolate and the other half in white.
-Lastly, I write "SOX" on some, the SOX logo on others, and colored some "socks" on others. 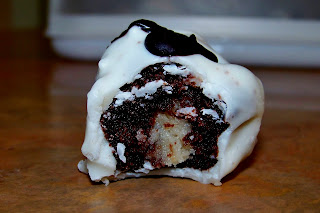 They turned out super yummy. They just weren't my prettiest baking project ever!
Posted by Stephanie at 5:00 AM