Pinterest is seriously awesome for finding new recipes. I have always been a photo cookbook type of gal. I like cookbooks, but I am very unlikely to choose a recipe unless I see a picture. Or the title sounds scrumptious. But I'm much more likely when there is a photo.

In the last several years, I have most oft turned to the Internet when I want to find a recipe. Usually I come up with some sort of idea of something to cook and I google the best recipes.

You have changed my life.

When I see these awesome looking photos, I can't help but pinning them and adding the ingredients to my grocery list. I have pinned several recipes that I have found on my own. But more often I have repinned something that I someone else pinned on Pinterest. Thanks to all the people that have pinned so many delicious recipes!

This week I have made several recipes from Pinterest. It is so easy to find something to make before I go to the grocery store because I just click on my "In the Kitchen" board and check out what looks good!

Now I will share with you what I have made this week: Actually I made this Lemon-Garlic Spaghetti 2 weeks ago, but I thought it would fit here.

I followed the recipe pretty exactly. Did you know pine nuts are uber expensive. For serious.

We both enjoyed it and would definitely make it again. 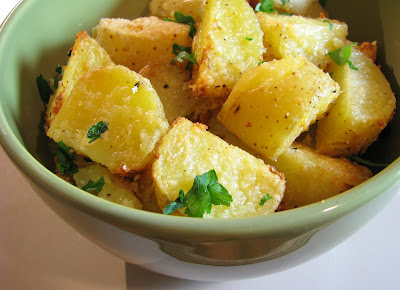 I made these Parmesan Roasted Potatoes on Wednesday night.

Target didn't have the right potatoes so I used smallish Yukon gold potatoes instead. But since they were bigger than the ones the recipe called for, boiling them for such a short time didn't quite cook them enough. So they were a little hard.

Other than that I followed the recipe and they were delicious (minus the hardness of course). Reheated they were really good too and they softened after being put in the microwave. I made these Easy Parmesan Knots along with the potatoes on Wednesday night.

They were actually VERY easy and SO yummy. I highly recommend them as an easy yummy addition to a meal. Though knotting them was no harder than rolling croissants from the tube, they look all fancy!

I made these White Chicken Enchiladas on Saturday night. I have been eyeing them for a while, but wasn't sure how Adam would react. But he really liked them!

I made half with chicken and half with black beans and garbanzo beans.

Obviously the beans were for me.

I didn't find green chilies at Target (as you have probably noticed I don't make multiple grocery trips) so I bought the tomatoes with green chilies Rotelle. It gave a slightly different flavor, but I liked it.

Also, I added some mozzarella cheese because 2 cups of cheese for the whole thing just didn't seem like enough to me.

The sauce calls for chicken broth, but I make an easy vegetable broth with warm water and a bunch of seasonings. But for the life of me I can't find the website where I found the recipe.

The enchiladas were yummy! The sour cream gives the sauce a different taste, but it was really good!

So Pinterest,
Thank You.
Posted by Stephanie at 5:00 AM