On a whim, while at the store in the spring, I decided to buy some Mammoth Sunflower seeds. I thought they would look cool. I planted them near the pumphouse because at the time we didn't have much going on there.

They started growing slowly and I wasn't sure exactly what to expect. Now? They are HUGE! I had no idea the stalks were so thick. They are at least 2.5 inches in diameter and they are at least 12 feet tall! I love walking past them every day on the way to work and seeing their progress. They were all as tall as the pumphouse before they even started to grow flowers. Now most of them have flowers. 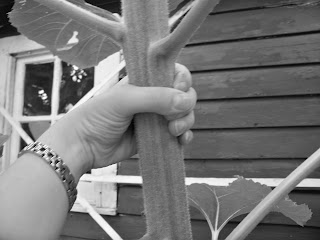 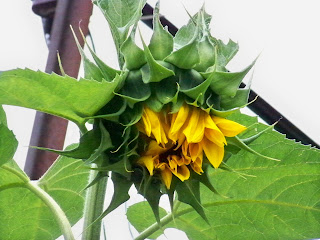 One day one of the stalks started really leaning. I am not sure what happened because it started out of no where. The other day I decided to cut off the flower and bring it to my mom because she used to really like sunflowers. (It was the only one I could reach too!) It wasn't a well thought out plan because it wasn't really easy to cut (thick stalk!) and it was really heavy! Once we got it there, we also had to figure out how to put it in a vase because it is so top heavy. We finally got it figured out and it looks great on her counter! 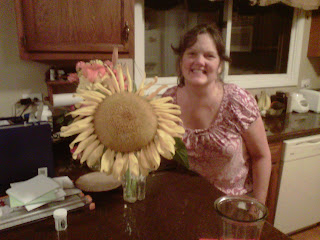 
After inspecting the sunflower close up and checking out the seed packet again I realized these were edible seed sunflowers. I decided it would be pretty cool to figure out how to harvest the seeds. Neither Adam nor I are into eating sunflower seeds, but some people like to!


Funny story about eating sunflower seeds....
The other day at school one of my preschoolers said her tooth hurt her a lot. To appease her I looked inside her mouth and there was a little piece of something hard sticking out of her gums! I reached in and pulled it out because that had to hurt (oops, forget the gloves, but I did wash my hands right away) and it looked like a little piece of wood. I asked if she had been chewing on a toothpick or something else and she insisted she hadn't. I let it drop. Later that day during snack time she said she brought a snack to share with her friends. She went to her backpack and came back with...a bag of sunflower seeds! (I still didn't get it). After explaining to her that it was nice for her to want to share, but that probably wasn't a snack we should share with our friends, she went to put them back. My assistant said, "THAT'S what was stuck in her gums!". Duh!


Anyway....
I have now decided to harvest the sunflower seeds from our flowers. Maybe Kristin's husband Ryan would like some? He always loved them in college. 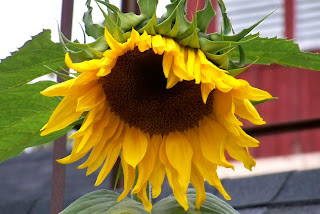 I found some websites like this one and this one and this one to help me figure out what I need to do. What I learned is that right now I just need to wait, enjoy, and let them dry out. After the heads are dry and dead, I can cut them off and hang them upside down to dry some more. A really good tip I read was to cover the heads with a paper bag if the squirrels or birds try to eat the seeds before I harvest them. Amy was just telling me that we could collect the seeds and use them to plant new flowers next year too! 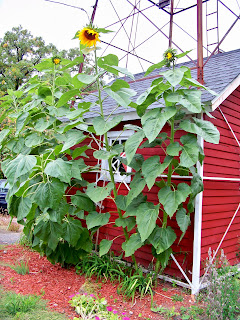 I'd love any additional sunflower tips you may have!
Posted by Steph at 6:53 PM