Random Weekend I'm a Poet and Didn't Know It

We spent a good part of Saturday working on the pumpkin patch. By "we" I mean Amy and me because Adam has been working crazy hours. Our neighbors, however, may think that Amy and I are a "we" because while I was talking to new neighbors and giving their little daughter some mini pumpkins, Amy was walking up to us, and I said "We got married last summer". Later I was thinking in my head, "Wait! By WE I mean that dude that drives around on the tractor and me! Not Amy and me!" I love Amy and all, but now I don't know what the neighbors think.

Anyway, after picking many a pumpkin and having them around the patch Amy said, "Can we use the John Deere to pick them up and bring them to the barn?" I said, ".......Um. Sure. But I don't know how to start it. Can you??" Sure I have driven it around many times, but not in two years! I called Adam and he talked me through it. We picked up all our pumpkins, Amy made sure they didn't fall off the back of the wagon like this book I read to my preschoolers (Sixteen Runaway Pumpkins)... 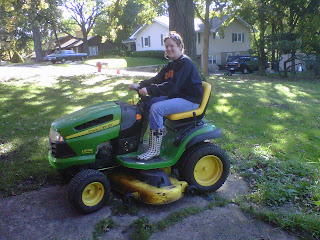 and we got them up to the barn and washed/bleached.  On top of all those pumpkins, we also picked TONS of gourds. They look awesome. I decided the bumpy ones are my very favorite. 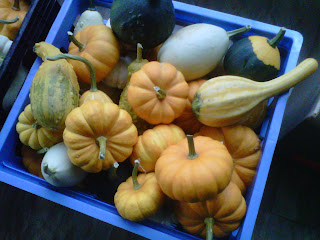 On Sunday Adam and I were working outside. He was raking apples because we have two very old apple trees that don't produce good apples. But they drop a million bad apples everywhere. Adam said to me randomly, "If anything happens to me. This is how you rake apples." I looked pretty horrified. He wanted to make sure I knew to rake them with the metal rake points pointing up not down like a rake usually works. 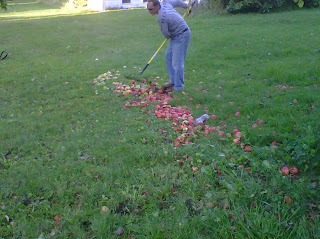 Then we got the pumpkins loaded on the hay wagon and brought into the barn for the night. Some of them need just a little more sun (there are many more in the pumpkin patch) so we want them out during the day, but covered and safe from destructive critters at night. 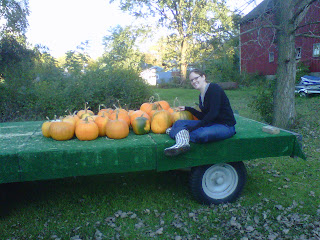 Also on Sunday Adam was burning more wood we have leftover from when we tore the garage down. He was burning it in a metal bin. I was a little nervous because some of the burning pieces fell on the ground. He told me not to worry. Until we looked over and it was starting to grow bigger. Then he worried. He can move quickly. 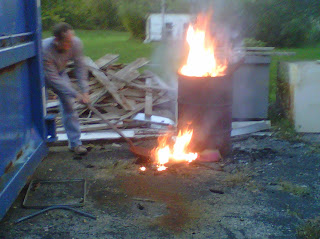 This is a random flower at church that I think is beautiful. What is it? 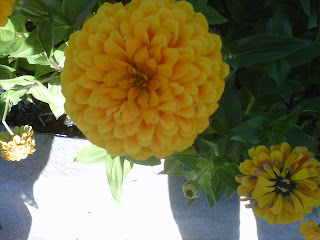 This morning in the pitch black before work, Adam pulled the hay wagon out of the barn. On the way walking to work, I walked past it to make sure they were all facing the sun the right way. While doing that I was inspired and wrote a poem and texted it to Amy with a photo. 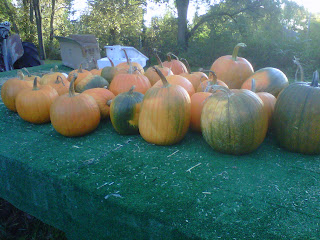 On the way home from work I stopped by again and was inspired again! 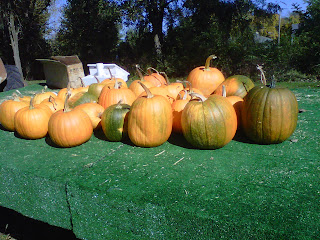 So that was our pumpkin weekend and my foray into poetry. Do you know the name of that flower? Do you think I could be a world famous poet? Or does it mean I read too many preschool books?
Posted by Steph at 9:46 PM