Well hello! Embarrassingly enough, it has been almost 2 months since I posted! But the next few posts will be explanation why! The posts will be out of chronological order....but...oh well!


Yesterday we threw a baby shower for my sister-in-law Jessica at my house. Her sister, me, my SIL Amanda and soon to be SIL Heidi worked together to throw it. Jessica is the wife of Adam's oldest brother. He has a son who is in high school, but this is their first baby together. We are awfully excited to welcome him into the family in June!
They are decorating the nursery in owls so we decided to go with an owl theme for the shower. You know I love me a good theme! I have also been obsessed with chalkboard crafts lately, so you will see a few chalkboard items popping up too!


**If you are going to plan an owl themed baby shower and I can help you with anything, let me know! 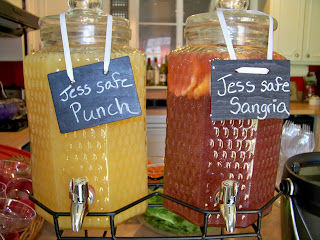 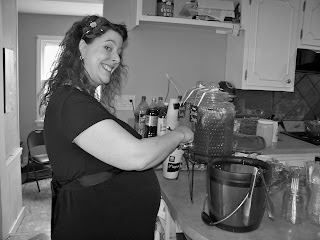 Yummy pregnant mommy safe punch and sangria being enjoyed by the mommy-to-be!
I made the punch with this recipe and it was delicious! 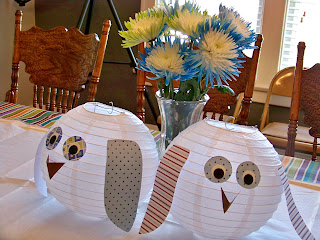 We found these adorable paper lanterns here and had to make them. I think they were some of my favorite! We used a variety of blue/brown patterned paper for all kinds of parts of the shower. I loved how the different patterns looked together. Especially the polka dots! Amanda found the lanterns inexpensively at Party City. They were easy to make! We just used Scotch Double Sided Tape to put them together. They were much sturdier than we thought. 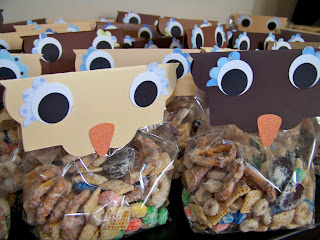 The Favors!
We saw these adorable owl favors and had to make them! I cut out the faces on my mom's Cricut using one of the bracket shapes. It gave a cute shape to the face. Then we punches the eyes out with craft punches. We made the eye lashes by punching scalloped circles from the patterned paper and cutting them in fourth. They were filled with yummy party mix! 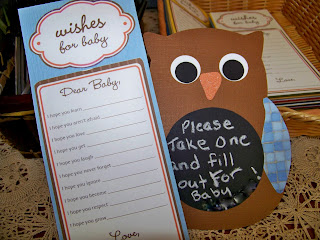 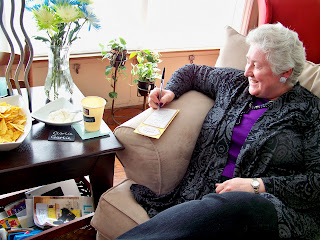 When the guests walked in, we had them take a "wishes" for baby card to fill out. I found the template here. Amy helped out by cutting them out and adhering them to cute textured paper in the neutral colors of the shower.  It was really neat to read through them after the shower. We loved seeing the thoughtful, loving, and funny wishes people wrote to him!

The owl is also the same owl that we used for the invitations. The wording for the invite was on a white print out in the middle instead of the black paper (regular black paper works as chalkboard paper-thanks Kristin!) I got the idea from Erin's first birthday invitations (template here). Cutting out 60 of these owls made for some cramped hands. Good thing we had margaritas while we were doing it! I had the brilliant idea to make the beaks out of super thick glitter paper. Not brilliant. You can only cut out one at a time then! 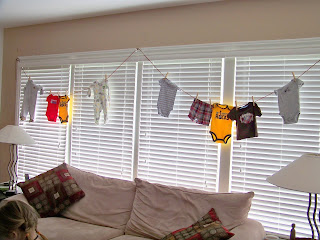 We hung a clothesline across the windows and each of us brought several outfits to hang with clothespins. It was super funny because 3 of us got the same "My Auntie Rocks" guitar onesie. But they were all in different sizes! He will know his aunties rock for the first year of his life. 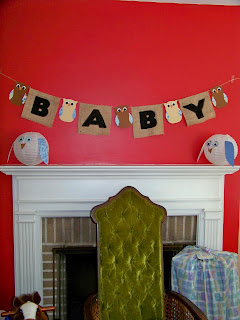 The burlap banner I just HAD to make at midnight the night before after seeing Stef tweet about one she was making earlier in the week. 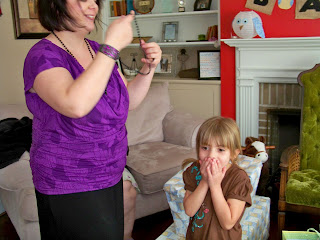 We also played the "Don't say 'baby'" game. Every guest got a beaded necklace and if you caught someone saying "baby" you got to take theirs. Jessica's niece was a rockstar at this game. She did got caught herself once! 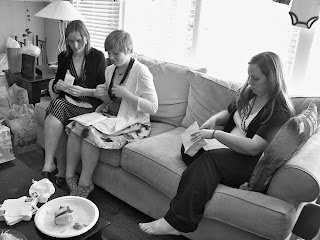 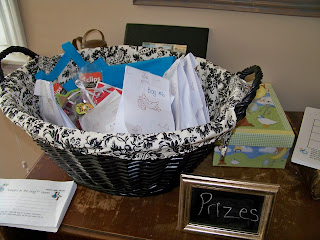 Guess What Is In The Bag Game
This is one of my very favorite games at a baby shower! You choose 10 baby related items and put each one in a paper bag. I stamped them with baby stamps and put a label on each one that had the bag number on it. Guests pass them around one at a time and use their hands to feel the bag and guess what it inside. Some of them can be very hard! Guests write down on their paper what they think is inside. Then the mommy-to-be opens them one at a time to reveal what is inside. We gave extra points for specifics such as "nasal aspirator" instead of "nose bulb" or "booger sucker" and "puffs" instead of "baby snack". Our 10 items: nasal aspirator, teething ring, pacifier, washcloth, puffs,
baby spoon, bib, bath toy, butt paste, and baby wipes 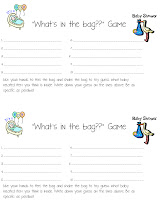 Template for the bag game 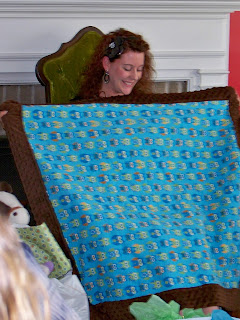 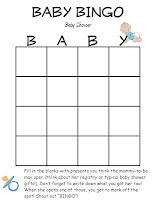 Jessica and the Baby Boy H were showered with lots of gifts. I was very excited for her to open the blanket I made for him. To keep things interesting during present opening, we gave guests a blank BINGO card to fill in with items they thought Jess might open. As people got BINGO they got a little hand sanitizer prize. 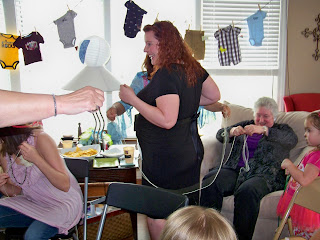 We also played the game where each guest cuts a length of yarn/string to try to guess how much it takes to go around Jess' tummy. The 4 closest got a prize! We got cute owl prizes from Amazon and the craft store: owl magnets, magnetic owl bookmarks, and owl totes. 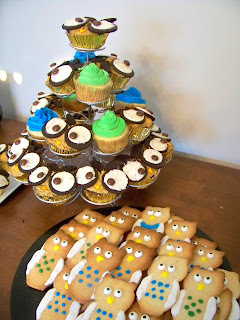 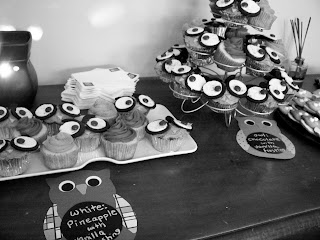 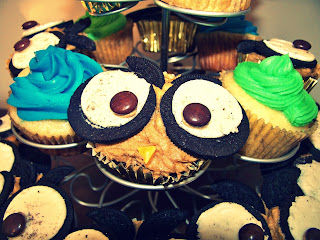 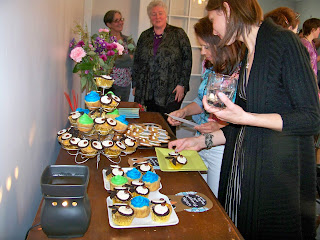 Yummy Desserts!
I made owl cupcake and blue and green cupcakes. The owl cupcakes were chocolate cake mix with chocolate chips inside and tinted brown vanilla frosting. The white cupcakes were white cake mix with crushed pineapple and vanilla frosting. The owl cupcakes took WAY more effort than I expected. I got pretty good at separating the Oreos to make the eyes. But the eyebrows....oh the eyebrows! I recommend getting 2 packages of Oreos just in case. My pile of broken Oreos was crazy. For every one Oreo I was able to cut to make the eyebrows I broke 2 or 3. But I love how they turned out! I used Reese's Pieces for the pupils because I figured the ratio of browns would be better than a bag of M&Ms. I used Wilton decorating candy for the beaks. Amanda made owl sugar cookies with cute polka dot bodies with a cookie cutter she found on Amazon. 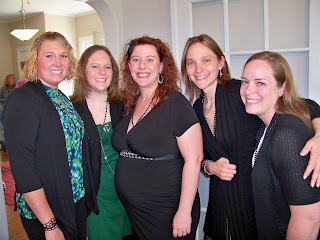 The Girls!
(The wives of all the brothers)
Amanda, Me, Jessca, Vel, and Heidi
Posted by Steph at 12:58 PM