On Sunday I posted about sister's Around the World themed bridal shower. Directly after cleaning up at my parents' house from the shower, the girls headed over to my house for the bachelorette party. We chose to do an "Arabian Nights" theme. It seemed like it would be classy and romantic. It was also REALLY REALLY hard to find ideas for. Pinterest failed me! But I did spend LOTS and LOTS of time on a ton of websites and gathered enough ideas here and there to pull it together!

We started off with drinking, chatting, gifts, and games at my house. Then we had a limo come pick us up and brought us to a few different bars downtown. Usually the downtown Chicago bar scene really isn't my thinking, but it was fun for the night! 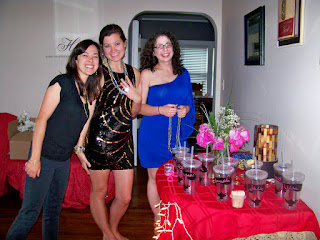 Some of the girls getting their things from the foyer. 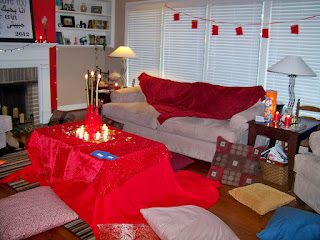 We decorated the family room area (we call it the Piano Room even though there actually isn't a piano in there anymore) all out with the theme. I bought 6 yards of red fabric and sewed 2 pieces together to make a huge tablecloth to drape over the coffee table. I also found a sparkly sheer fabric to go over the top. 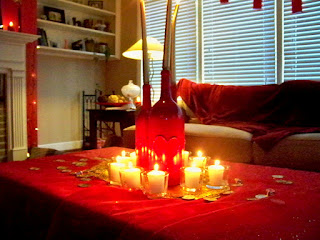 I've been lusting after those spray painted wine bottles with words written all over them that are all over Pinterest. Adam agreed to dumpster dive in our recycling bin for me and found 3 empties. I  was worried about spray painting wine bottles because none of the spray paints specifically listed glass. I bought primer and some of the higher quality spray paint. I sprayed with the primer. Then wrote with hot glue. Then sprayed the spray paint on. One had a heart, another I wrote "love" and another I wrote "love" in Arabic  حب . If you think it would be hard to write in English with hot glue, imagine writing in Arabic with hot glue! I took a picture of it, sent it to my soon-to-be brother-in-law and asked, "What does this say?". He said, "Love". So I was happy it looked right!

In the wine bottles were gold tapers (they had to be shaved down to fit inside) and they were on gold doilies from the party store. Around them we had white votives in glass holders. I also found fake gold coins at the party store which we sprinkled all over the room. Bonus: I can reuse them in my classroom! 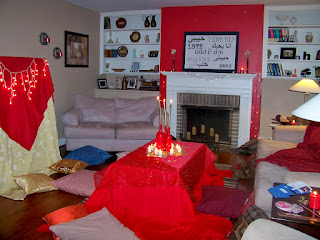 View from another angle 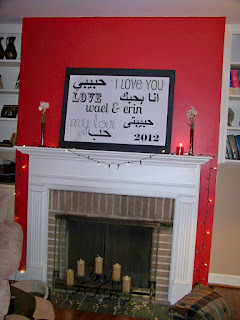 Another Pinterest project was this print for above the fireplace. I saw this post about using engineer prints to get a large photo mounted. I used this site to get my Arabic words. I designed this "subway" art in Photoshop. But I had a TERRIBLE time with the Arabic words. When I copied them and pasted them, the words flipped around. Arabic is read right to left and for some reason Photoshop and Word had a really really difficult time with it. I googled and googled and couldn't figure out a good way to do it as a high quality image. I finally asked a friend of Erin's in Egypt  for help and she sent me the words in a PDF. Problem solved! Printed at Staples for around $3 and used a coupon at Staples to get the big black foam board to mount it on (originally $7). To get it straight I measured off the whole thing and marked it. I had Adam hold down one side while I lifted the other and sprayed it with spray adhesive. Then we did the opposite side. I must have sprayed a bit too much in one area, because it did smudge a little, but you live and learn! 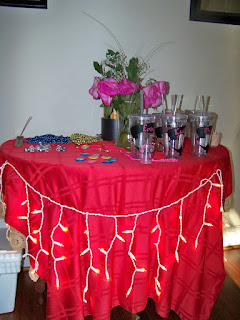 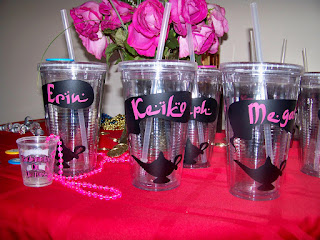 In the foyer we had a table where the girls picked up mardi gras beads, light up rings and personalized cups. We got these cups, they were actually a bit more expensive when we bought them, but free shipping! Her girlfriend had the idea for the cups in the limo! I of course had to personalize them using my Silhouette cameo. I found the lamp shape in the Silhouette studio. I found this free font called "Arab Dances" that looks like Arabic with the lines and dots but is actually English. I cut it all out on Silhouette vinyl. Each girl got one. 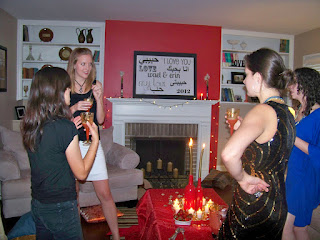 We did play a couple games. It is HARD to come up with bachelorette party games. The Internet is actually NOT very helpful in this area.

One thing we did was invite anyone who was interested to bring lingerie for her. She opened them up and had to guess who it was from. Then we put names on cards and her husband will get to pick what she wears each night of her honeymoon!

The other game we did was ask Wael questions beforehand. We then asked Erin the same questions. If she got the answer the same as him, she got to dole out a drink. If she got it wrong, she had to take a drink. There were lots of laughs during this game!

Some of the bachelorette party questions we asked: 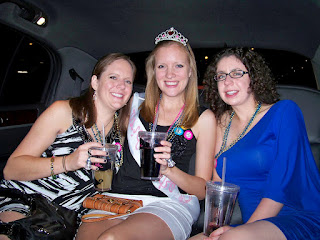 Me, Erin, and a friend in the limo 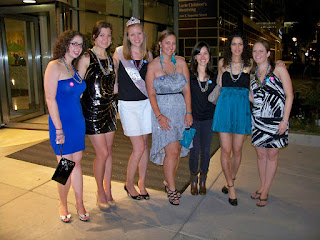 All the girls in front of a rooftop bar we visited 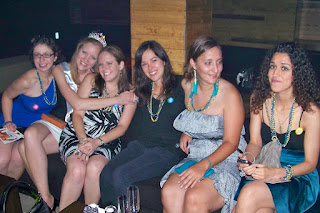 Most of the girls in a quite busy nightclub (before it got busy!)

The night was a blast and I had fun pulling together all the various ideas for the theme!

If you are planning a similar theme here is a list of our ideas:
**I had the idea to spray paint wine glasses gold to be like chalices or goblets, but then realized spray paint isn't food safe. I wasn't going to spray INSIDE the glasses, but it still seemed wrong. So I was VERY happy to find the plastic gold wine glasses.