Adam and I had planned to spend part of Saturday afternoon working in the pumpkin patch: weeding around pumpkins, turning pumpkins so they sit up and are facing the sun and picking the ones that were ready.

Well that plan changed really quickly when we got out there and started really looking around. For every good pumpkin there was at least 2 ruined ones. We are guessing that it is the squirrels because they have been running rampant around the area lately. They chew into the pumpkins and completely clean out the inside. Better than I have ever done!

It is so disappointing because they, of course, go for the ripest and best pumpkins. Well hey there squirrels! Those are our most profitable pumpkins!

Because of the danger of squirrels, we decided to pick ALL of the viable pumpkins, even the still green ones, because they have a better chance of ripening where they are safe than staying where they are and getting eaten. If they are mature, pumpkins can still turn orange in the sun after being picked.

Last year we sold about 30 pumpkins and donated another 40 really good ones. That doesn't include all the green ones that never ripened. Yesterday we picked 90 pumpkins. Only 15 were orange.

But, we did our best and picked what we had. We also washed them in a bleach solution to protect them like we always do. We want to sell the best pumpkins we can! If you buy a pumpkin from a pumpkin patch or the store, I recommend wiping it in a 1 part bleach to 10 parts water solution to keep bacteria from growing and making a squishy squashy pumpkin on your front stoop. You can do it on the inside too if you cut it open. 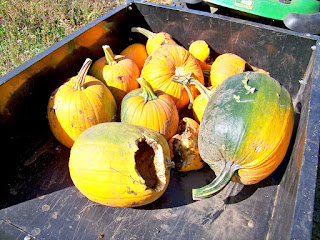 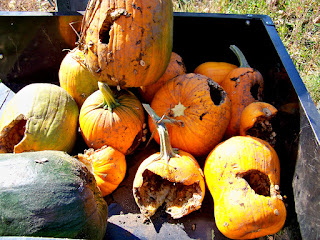 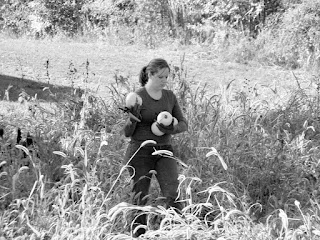 Adam snuck a picture of me in the field holding little white novelty pumpkins. 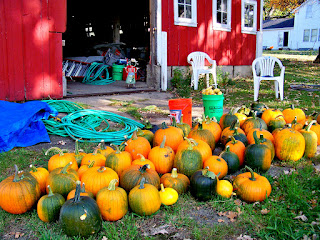 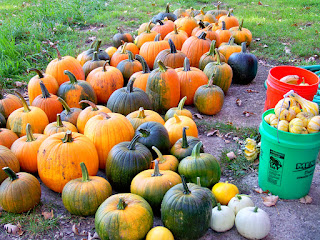 Our crop for this year 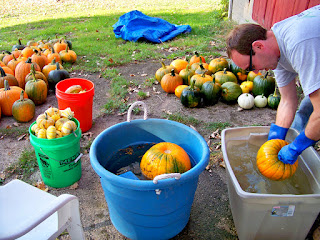 Washing them:
We wipe them down in the blue bin with the bleach solution and then rinse them them off in water. Then they sit out to dry. 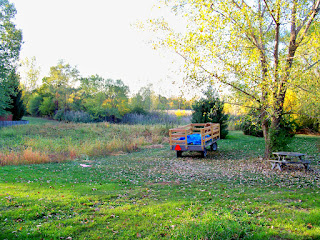 After that, we set them out on our hay wagon in the sun. We are covering them with a tarp at night to protect them and uncovering it during the day to allow sun to get to them.

We still do have hope because a lot of them are partly orange and will definitely ripen up over the next couple weeks. But too many of them are still pretty green. Oh you want to help?! Great! Cross your fingers for sun and an unseasonably warm Chicago October! Thanks!