I have been making cakes for our nephew's (Adam's youngest brother's son) birthday for the last several years. I have posts about a guitar cake and football helmet here and ninja turtles here and here.

This year I was driving with him home from Vacation Bible School one day in early August and asked what (his birthday is tomorrow) kind of cake he wanted this year. At first he said ninja turtles again and I told him he could pick something else if he wanted. Then he said, "Wait! No! I saw an Indiana Jones cake on the internet that I want! It is Indiana Jones running from a huge boulder!" I thought, "How does a 7 year old see a picture of a cake on the internet?? Is he pinterest-ing??"

But I looked it up and saw this cake and then this one and decided I could do it!

I baked a total of 3 cakes. I used about 3/4 of a cake mix for each side of the boulder and a whole cake for the base. I baked the sides of the boulder in a 1.5 quart Pyrex bowl and the base in a 8x14 inch rectangle pan.

I used the flower nail (for the first time) to bake it to help it heat through the core since it was so deep. I lowered the temp by 25 degrees. I don't even know the total baking time because I set it for the original time and kept adding 5 minutes at a time. It was probably at least 45-50 minutes for each cake.

The first time I forgot to use cake release on the nail, oops, so that one became the base. The other one I remembered and it came right out. If you don't use cake release, it is THE BEST. It is grease and flour in one and cakes come right out...no problem! 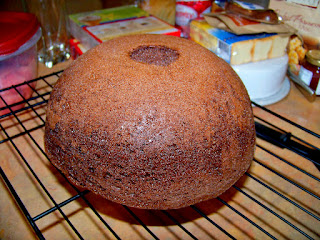 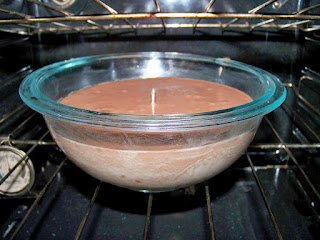 second in the oven

I baked the cakes Saturday and did the decorating today. First, I put the 2 pieces of the boulder together with frosting and then dirty iced the whole thing. I also dirty iced the base. I put them in the fridge for 20 minutes before continuing and icing them both completely with chocolate buttercream (Wilton recipe).

Actually, as I was googling pictures just now, I found this one and discovered the boulder should have been white. AGH! Oops. I am sad. I should have done my research better. I assumed the boulder was brown. One of the cakes I saw was brown, but the other WAS white. 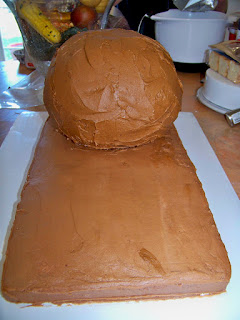 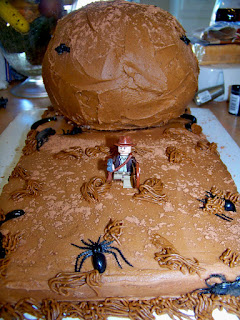 I sprinkled cocoa powder on the base and the boulder to look like dirt. I used the tip for making grass (233) to make it look cave-y. I thought of it after Lisa posted about making cookie monster cakes on Twitter and it inspired me to use it to make cave "stuff". I got cheap plastic spiders, bat rings, and snakes to put around the cake. We used one of Chase's Indiana Jones lego guys to be Indiana himself! 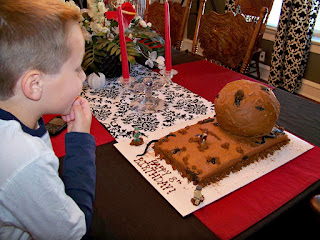 Chase was super excited about it! 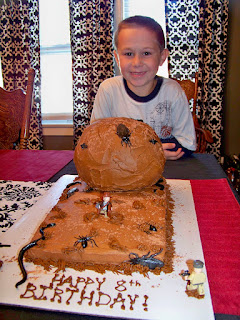 Sorry for the following pictures...I am just super excited with how it turned out! 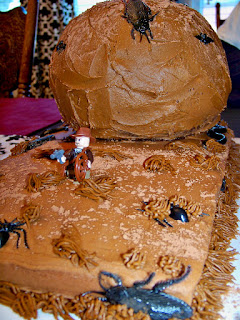 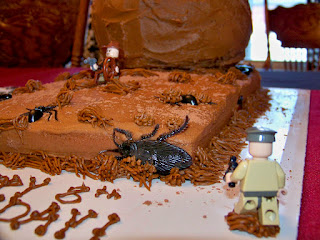 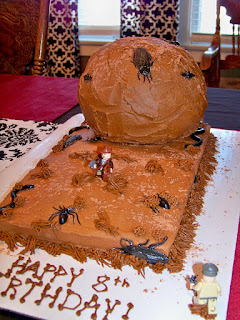 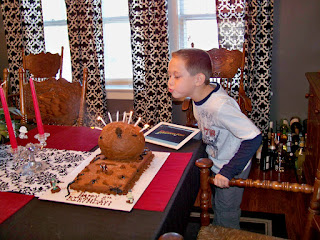 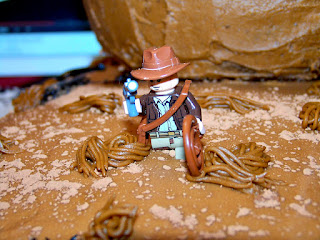 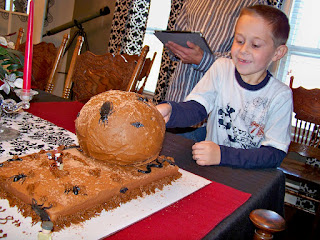 Chase REALLY wanted to roll the boulder over, so we let him push it with a fork! 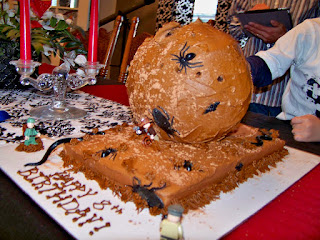 I was busy taking pictures and the boulder almost rolled off the base and onto the table and floor! Austin, noticed in time and said something so I caught it in a plate with one hand while still holding the camera in the other! 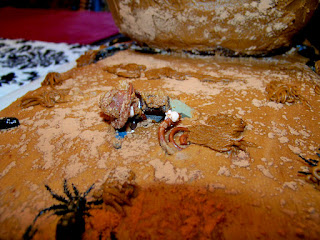 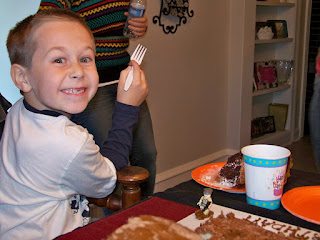 This cake was overall pretty easy to make! The frosting didn't have to be perfect since it is supposed to be a boulder and cave, so the decorating took a lot less time than a lot of other cakes I've made! I'm super excited about how it all came together too! The only thing I would do differently if I could do it over again? Make the boulder white. This is bothering me way too much. Let's blame Adam, he's a boy, shouldn't he have known it was supposed to be white and warned me? Ok...I'm getting over it. Right now....in a minute maybe.