Ok....this is my very first post in the series to be published. But not my first post written. I started writing these at 9 weeks and then went backwards from there based on the notes on my phone because I want them for memory's sake. So....this is trying to go back and remember where my head was 2 days after I found out! (Though the pictures we started taking immediately!) 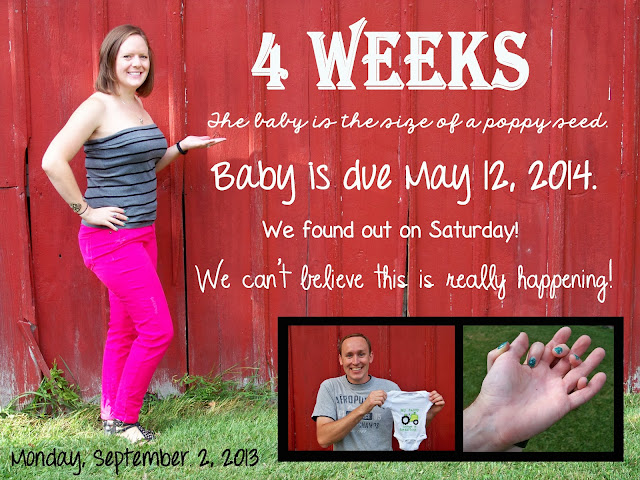 How far along: 4 Weeks (Crazy that it is considered 4 weeks when really there's only been a baby for less than 2 and I have only known for 2 days!)
How big is the baby: The size of a poppy seed. Adam went to Dunkin Donuts to get us a poppy seed bagel just for this. I dropped a few poppy seeds in the making of this photo. We have started calling the baby Poppy. Do you know how small a poppy seed is?!?!
Weight gain: None
Doctor: Haven't called yet.
Clothes: Regular
Sleep: None because I am TOO EXCITED!
Movement: Not yet!
Food/Aversions: None
What I miss: I missed Adam until he came home Saturday afternoon!
What I am looking forward to: Taking more pregnancy tests so it feels real!
How I found out: So I had been temping and charting throughout the summer. I fully expected this month to be a bust since Adam was out of town for the second half of the month. Timing is everything though and the charting helped! I tested Thursday and Friday with negative results. But Saturday morning when I took my temperature and it was still up....I had a feeling! I jumped out of bed and took a test. Positive! Another one. Positive! Another one. Positive! (They were three different kinds/brands. I'm not TOTALLY crazy). I couldn't believe it. I just stared at them forever. It was 5:30 in the morning. Adam was supposed to come home Friday night, but his flight was cancelled, so he wasn't due in until Saturday afternoon (that day). I downloaded a bunch of pregnancy apps. Looked at my charting calendar. Looked at the pregnancy tests. And...repeat. That morning when I finally got up, I went craft show-ing with my mom and kept my big secret. By the time I picked Adam up from the airport, I thought I'd made the whole thing up...so I didn't tell him! I even had thoughts in my head that I would wait until Monday or Wednesday when it was even more sure to tell him (Uh...he would have killed me). Sunday morning I woke up and took 2 more tests....darker! When he was in the shower I laid the positive tests on a onesie I made that says "My Daddy Drives a Tractor" on his side of the bed. When he *finally* noticed he said, "Really?? Really??" It was so fun! We are so thrilled. It doesn't even feel real! I could barely pay attention in church!

Are you still looking? 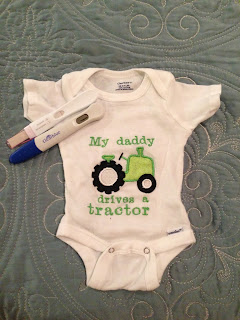 Some close friends knew we were trying because it was really hard to hide not drinking during the trying weeks this summer. So they knew right when the time to ask was. It was either lie and say it was a bust that month (and that seemed mean because then they would be sad for me when really I was happy) or tell them SO SUPER early. So, we decided to tell them.

My good friends from college have been very supportive this summer so when they asked how it was going, I sent them the picture of the tractor and the pregnancy tests! Lots of happy texts! Erin stopped by to drop something off so I said, "Oh, I have something to show you. Which one should I order?" and texted her the following picture. And then when she was looking at it, I said, "For me?" Lots of squealing, crying, and hugging ensued! 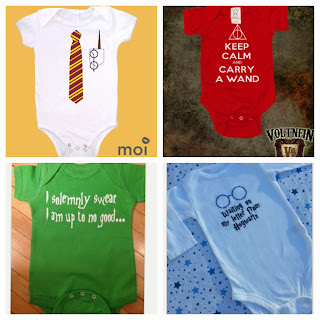