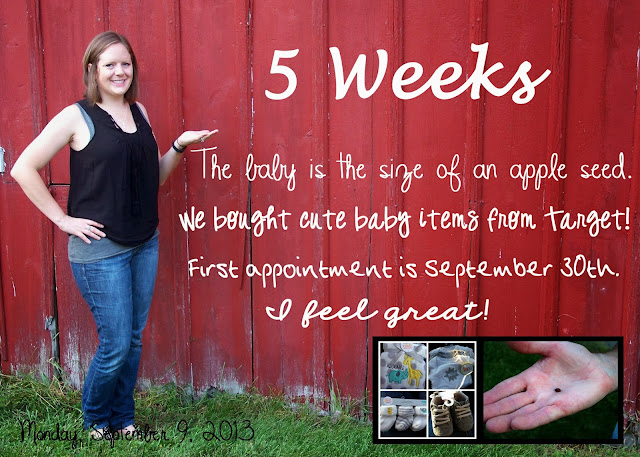 How far along: 5 Weeks
How big is the baby: The size of an apple seed. That is much bigger than a Poppy Seed!
Weight gain: None
Doctor: Called a new OB to make an appointment because I am switching docs. Called back to check what they would do at the appt and they said they don't do an ultrasound until 20 weeks unless there is an issue. 20 weeks?!?! That is not going to work for me! Had a major meltdown. Major. Went to Target with Adam and bought adorable grey baby things and felt better. Decided today to go with a different new doc office that was also highly recommended  They do an early 8-12 week ultrasound and then the 20 week scan.
Clothes: Regular
Sleep: Inconsistent. Sometimes wake up and cannot fall back asleep. Very tired during the day!
Movement: Not yet!
Food/Aversions: Mostly everything is normal. One morning I woke up and felt nauseous. Ate some almonds, went back to sleep, and then woke up normal. A few times feeling yucky, bloated or burpy. Nothing I can't deal with!
What I miss: Nothing right now! Not drinking while trying was frustrating. But now it is fine because I know I am growing a baby. I happily gave up all diet pop, caffeine, and anything on the questionable side at all! I am definitely a "better safe than sorry" type of gal. We went to a concert on Saturday night and it was a blast! I just told people that I had a bad cold and took cold medicine and cold medicine and beer don't mix well with me!
What I am looking forward to: Sharing our good news with more people. I want to tell EVERYONE! And keep it a secret at the same time. I want everyone to know this exciting life-altering news! But it is also scary.
TMI: Seeing the pregnancy tests get darker and show up faster is the best ever....yes...I am still taking them. Adam pointed out my collection of them on the counter and asked, "Is THIS normal?"
Oh! And This: We told Mom and Dad on Sunday! We had them over for dinner. Before dinner we gave them each a present to open. I made Mom blocks that say "__weeks until I'm a Grandma" that she can change each week. I embroidered Dad a shirt that says "Captain Grandpa" (because he has a sailboat). Mom was almost hyperventilating! It was so fun to tell them! They were so surprised. Funny though: apparently my dad was disappointed I hadn't announced the weekend before when we'd had dinner together until he found out my mom had invited us, we hadn't invited ourselves. That is some sort of dad's intuition because I had just found out I was pregnant the day before!

More fun from this week: 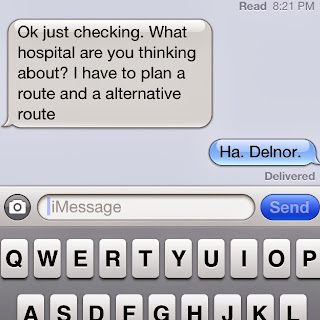 Adam was reading his emails about responsibility of the dads and texted me this one night! Too cute! 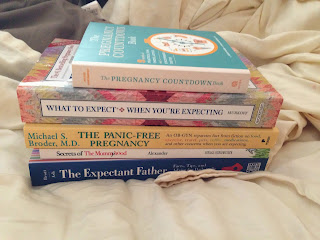 My stack of pregnancy books that arrived from Amazon (on my unmade bed). I had them in my cart while trying, but refused to order them until we got a positive. 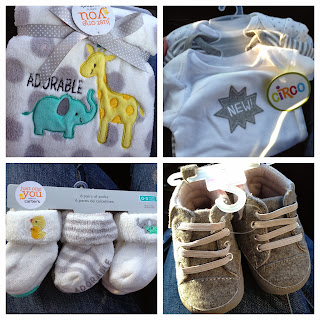 The adorable baby things I bought from Target. I love grey! It could go with blue for a boy or pink for a girl! 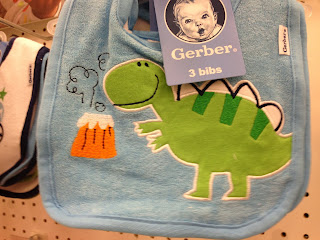 Also saw this bib at Target and couldn't figure out why this dinosaur was drinking a beer on a baby's bib! 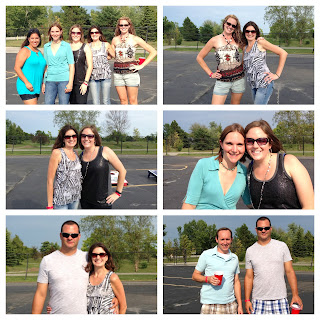 Pictures of our fun from the concert! 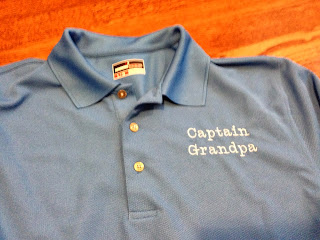 The shirt I embroidered for my dad 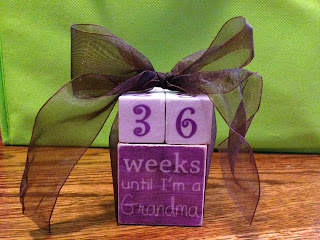 The blocks I made for my mom 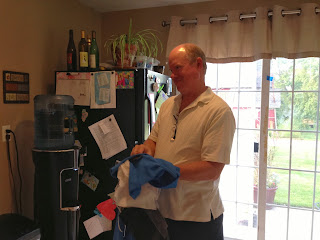 My dad's face when he saw his shirt 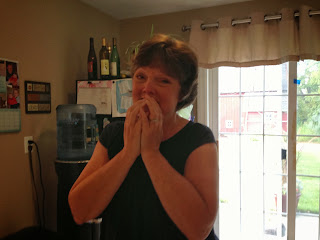 My mom when she saw her blocks 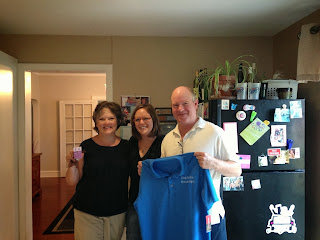 Me with my parents!